The Nigerian Government and the International Labour Organisation ILO, have launched a project called the “Nigeria Just Transition and Green Jobs for Nigeria Project”

The aim of the project is to mobilise government, Workers and Employers organisations as well as development partners to accelerate climate action with decent work and just transition for all.

Other objectives of the project are the strengthening of institutional capacity for the design and implementation of integrated evidence-based just transition policies among others.

At the launch in Abuja, Nigeria’s capital, Minister of Labour and Employment, Dr Chris Ngige in a message, said even though the entire African continent, contributes less than 3% of the Green House Gas the impact of global warming is more severe on the socio-economic well-being of developing countries.

He said that the situation is made worse because some, if not all developing countries are already being challenged by intermittent economic instabilities and recessions due to COVID-19 pandemic as well as other development challenges contributing to their high poverty profiles and poor social indices.

According to the Minister, “the climate policies and strategies formulated for Nigeria must be carefully planned, implemented and evaluated to ensure that no one is left behind. That is the essence of the Just Transition initiative.

“The intense global campaigns to replace fossil fuel with renewable energy sources has adverse implications on Nigeria’s economy, due to the nation’s high dependence on crude oil exportation as the major source of foreign exchange earnings.

He said that the degree of impact of climate actions on sectors in Nigeria vary, with the oil and gas industry expected to be most severely affected.

“However, the agricultural industry, as well as five (5) other sectors identified in the Nationally Determined Contributions (NDCs), will also be hard hit if ignored in the process of cushioning the impact of the actions on workers.

“This would create a dependency phenomenon, with loss of jobs in large numbers and significant economic pressures on the livelihood of the affected workforce, ultimately sending negative ripples on the nation’s economy at macro level”, Ngige said.

ILO Country Director Ms Vanessa Phala in her address, said the actions planned under the project will contribute to strengthening the resilience of local economies and expansion of opportunities for decent job creation.

She said the 2015 Paris Agreement highlighted a just transition and decent work as essential elements to responses to climate change as well as the Guidelines for a just transition towards environmentally sustainable economies and societies for all, adopted by the ILO constituents which she said “offers a framework to guide this transformation.

“At the 2019 United Nations Climate Action Summit, the UN also initiated a Climate Action for Jobs initiative which aims to enable ambitious climate action that delivers decent jobs and advances social justice; support countries on bold solutions for a transition towards a sustainable future that is just for all and enjoys broad-based support and facilitate an inclusive and sustainable recovery from the COVID-19 crisis for building back better”, Ms phala said.

She disclosed that the ILO Country Office Abuja, with the support of the French Government has commenced a project on Social Dimension of Ecological Transition which has been domiciled as the Just Transition and Green Jobs for Nigeria Project. 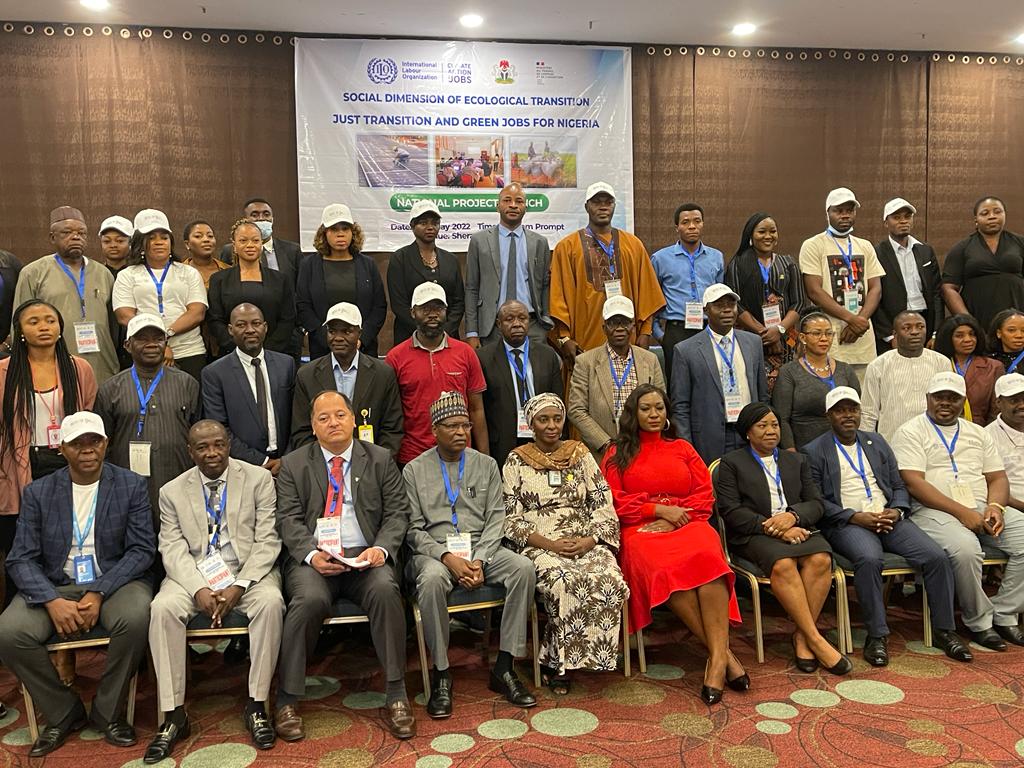 The project she said is a multi-country project, also being implemented in some other African countries such as Cote d’Ivoire, Senegal and Nigeria and scheduled to run until December 2024.

In a goodwill message, General Secretary of the Nigeria Labour Congress NLC, Emma Ugboaja, said that the Just Transition is the flagship contribution of the World of Work to the Climate Change discourse.

“The struggle for the mainstreaming of workers’ concerns and perspectives on the global climate change discourse did not come easy. It took several years of struggle by trade unionists for Just Transition to be mainstreamed into the United Nations Framework Convention on Climate Change (UNFCCC) Agreement at COP 16 in Cancun Mexico in December 2010.

“The rendering of this milestone mainstreaming of Just Transition reads: 2 | P a g e “Realizes that addressing climate change requires a paradigm shift towards building a low-carbon society that offers substantial opportunities and ensures continued high growth and sustainable development, based on innovative technologies and more sustainable production and consumption and lifestyles, while ensuring a just transition of the workforce that creates decent work and quality jobs…”, he said.

It is expected that the launch of the “Just Transition Project in Nigeria” would create awareness and sensitise stakeholders and the general public on the need to support the initiative towards harnessing the various opportunities created by the climate change actions in Nigeria.

The project, designed to be private sector led, according to the organisers, will ensure that substitution of fossil energy with solar, wind powers and so on would not lead to deficits in job volumes but should open new and diverse opportunities for new investments, new technologies and new jobs, especially for young Nigerians.

There were goodwill messages from the French government, the Trade Union Congress of Nigeria TUC and the Nigeria Employers’ Consultative Association NECA among others.

There was also a panel discussion to throw more light on the project.