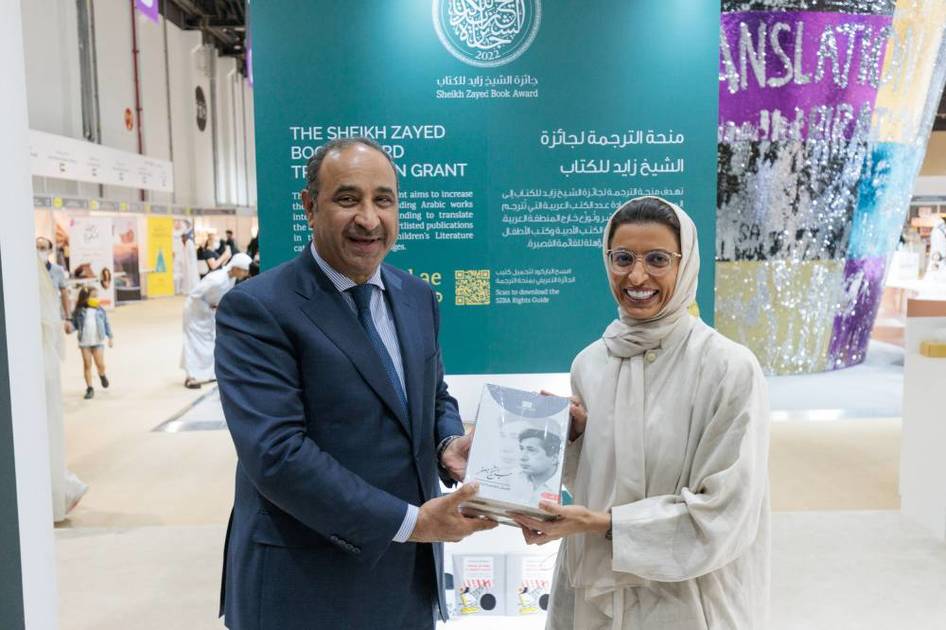 Abu Dhabi: “The Gulf”
The Iraqi Minister of Culture, Tourism and Antiquities, Dr. Hassan Nazim, praised the great and crucial role of the Sheikh Zayed Book Award, one of the most prominent Arab literary awards, in promoting creators on a regional and global level. This was done during a tour of an Iraqi delegation led by the Minister of Culture at the Abu Dhabi Book Fair. Ali bin Tamim, President of the Abu Dhabi Center for the Arabic Language, and Saeed Hamdan Al Tunaiji, Director of the Acting Center and Exhibition Director.
The Iraqi Minister of Culture attended many literary sessions and seminars, most notably his participation in a research paper in the session celebrating the Dean of Arabic Literature, Taha Hussein, the central figure in this year’s exhibition, shedding light on many important aspects of Hussein’s life and biography.
Nazim congratulated the prize winners and Dr. Abdullah Al-Ghadami for being named Cultural Personality of the Year, emphasizing that he is a great literary and critical stature who, since the mid-eighties, has contributed to addressing many valuable topics in the field of criticism. , which explains that Al-Ghathami’s efforts and writings played an important and effective role in creating a qualitative shift in the Arabic critical discourse, and that it has greatly influenced modern literary critical curricula, in translation and application, and clearly has paved the way towards confirms the presence of the clear academic Arabic critical discourse.
He stressed that the exhibition is an ideal opportunity to strengthen the cultural movement of the Arab region, as after three decades it has become a platform that mobilizes the elite of Arab and foreign intellectuals to meet on the basis of common consciousness and awareness , and pointed out that the exhibition has revived the continuity of the publishing sector and strengthened its presence after a season of hiatus. , which will restore the book’s brilliance and knowledge as he made it clear that the election of the Dean of Arabic Literature, Taha Hussein, is a central figure, a well-deserved honor for this high literary stature that arouses interest in Arab culture in the hearts of future generations. .
Noura bint Mohammed Al Kaabi emphasized the role of the exhibition in encouraging the publishing industry and strengthening the book’s position in the light of technological development and the spread of digital content, appreciating the great efforts made to prepare the Sheikh Zayed Book Award and its role. in strengthening the contribution of cultural creators, thinkers, creators and publishers, especially young people, and their support to move forward to enrich the cultural and literary life of the Arab region at an award named after the culture’s first protector, the late founder Sheikh Zayed bin Sultan Al Nahyan, may God rest his soul.
She praised the great diversity that characterized the exhibition’s current session, in addition to the accompanying events such as live seminars, black box cinema and others, noting that the exhibition was and remains one of the most important cultural events in the country and the country. region that offers new and distinctive not only from different titles and distinct in their diversity. Rather, it goes beyond presenting new ideas and methods for interacting with the audience of the exhibition.
Dr. Ali bin Tamim welcomed the Minister’s visit and participation, which enriched the exhibition through his participation in many sessions and seminars and his meeting with intellectuals, emphasizing that the Minister is not a strange figure in the cultural movement; Rather, he is a prominent figure with many important contributions in the field of translation, and he has a group of published works within the translation project “Kalima”, which seeks to revive the translation movement in the Arab world.