You likely all know the name Turtle Beach well, and you likely all associate it with one specific thing: gaming headsets. Every now and then this gaming audio expert dabbles in something new, however – and such is the case for the Recon Controller, a new Xbox pad from the company.

The controller is an interesting effort, and one which leans into the strengths Turtle Beach is well known for with some clever gimmicks – but it’s also a nice piece of kit across the board, a perfectly serviceable Xbox controller – if, that is, you can stomach the fact that it’s wired.

Let’s talk about the big, defining feature first. At the top of the controller, above the Xbox home button, is a selection of additional audio-controlling buttons.

You know where this is going, obviously — a bunch of the features you’d usually find in Turtle Beach headsets are here, baked right into the controller. There’s EQ presets, the ability to define a custom volume mix between game and chat audio, proper mic monitoring, and a dedicated mute button.

Also included as a dedicated toggle is the company’s ‘Superhuman Hearing’ setting. This is designed to amplify the quietest sounds in the mix so that, for instance, you can hear footsteps creeping up behind you, or the dull clatter of a grenade landing nearby. It’s a cool addition for competitive settings, but runs the risk of flattening more carefully-constructed sound mixes in single player games. 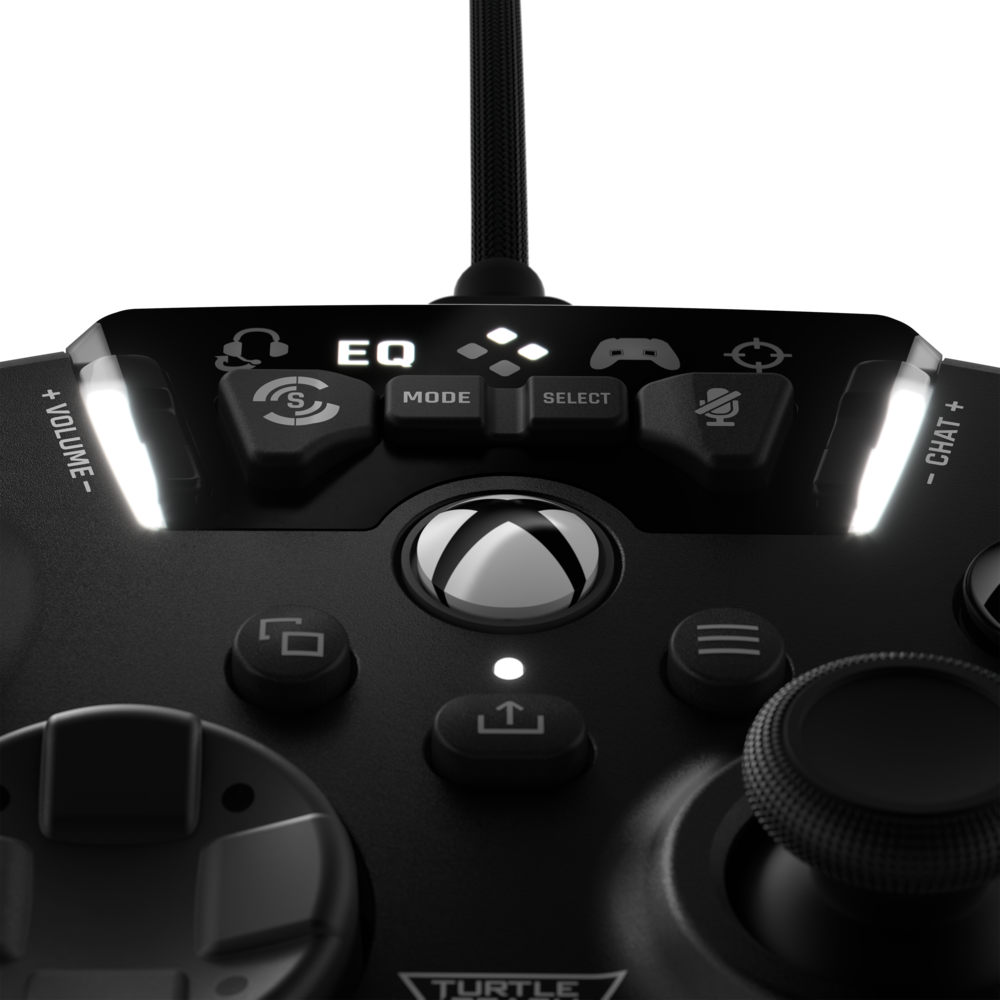 The controller’s various audio control options work with any standard-issue headset you plug into the 3.5mm jack at the bottom of the controller – and though your milage will vary depending on the quality of the cans you plug into it, I’ve found the illuminated on-controller buttons to be more useful mid-game than even the fancy controls baked into the earcups or wiring of more expensive headsets.

Beyond the built-in audio amp, this is a pretty standard-issue Xbox controller that’s compatible with PC and the Xbox One & Series X & S consoles. It has all of the features you’d expect – though the one major notable addition is two ‘quick action’ paddles on the underside of the controller.

You can map these two additional inputs to whatever function you prefer, and save custom profiles that you can then switch between on the fly. This is a similar feature set to other ‘pro’-minded controllers including Microsoft’s own Elite Controller – though more expensive options admittedly have more buttons of a higher quality. Still, it’s a nice option to have, and helps to set this controller apart aside from the audio EQ stuff.

And what of the actual, well, controlling function? Well, it’s nice. This certainly isn’t the extra controller you palm off on the house guest you don’t like that much for multiplayer. In fact, you might hog it yourself. It’s lightweight thanks to its wired, battery-free nature, but doesn’t feel so much that it feels flimsy – it has a decent feel to it. The loss of wireless connectivity stings less thanks to the controller shipping with a large 10ft braided cable, too.

There’s one secret weapon on the gaming input function, too – ‘Pro-Aim’, a feature that lets you reduce the sensitivity of the right thumbstick temporarily – helping in intense situations such as sniping. This sort of feature is common on gaming mice and is fine – if you have use for it. 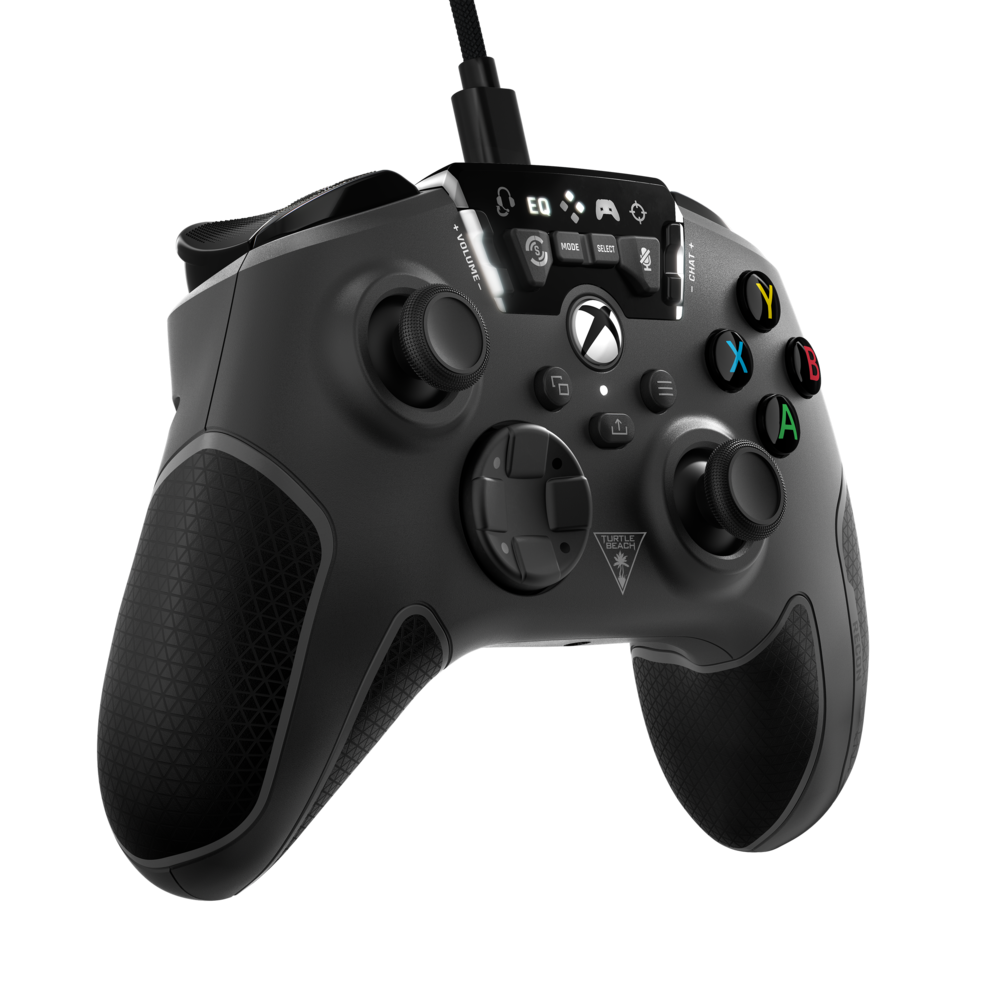 The downsides are tame. In muscle-memory terms, you might be initially frustrated that the Start, Select, and Capture buttons are shifted down a little thanks to the audio EQ buttons – but your brain will catch up with that. I’m not an enormous fan of the deep, concave D-Pad – I can’t imagine that feeling particularly great in Street Fighter, but I’m a fight stick player so it’s not a real consideration.

I love the more coarsely textured triggers, but aren’t as big a fan of the rubberized grips, which have a strip of hard plastic running through them – either go rubberized or don’t, this halfway stuff is rubbish. The analog sticks match the triggers with a lovely feeling to their edge texture, though, and while I can nitpick all day, I jumped into numerous games and found this controller to be natural and comfortable.

At $59.99 / £49.99, the Turtle Beach Recon controller comes in at the same sort of price, give or take depending on region, as the standard official Xbox Wireless Controller. You lose the wireless connectivity, but gain the extra bells and whistles this has to offer. Only you can decide if that’s a worthwhile trade-off for you.

From a more objective position, this is certainly one of the best-value controllers in its price bracket. If you’re willing to live with wired, it may even save you money, as the EQ settings can elevate cheaper headsets, reducing the need to splash out on a truly expensive audio solution. Depending on your circumstances, it’s a very easy recommendation.