A new generation of gaming is here. While Sony launches iterations of its gaming consoles every few years, it only releases truly next-generation upgrades every seven or eight years. For both Sony and Microsoft, last year was that year. With Microsoft launching the angular Xbox Series S and Series X, Sony has taken a slightly more unique approach with the PS5.

Despite the fact that the PS5 has been out for a while now, it’s still relatively unavailable. That’s thanks to a combination of the global chip shortage, scalpers buying up stock, and so on. But when the time comes, should you buy a PS5?

Easy. Yes. Not because it will bring with it a complete visual overhaul just yet, but because it feels better than any PlayStation before it, and will support all the fancy high-end features on your next TV. And, down the line, it will likely feel like more of a generational leap.

The Xbox Series S and X consoles take a classic approach that allows the consoles to blend into their environments, at least somewhat. Sony has taken the exact opposite approach with the PS5. The console is huge, oddly shaped, and frankly, absurd-looking.

Absurdity doesn’t necessarily equate to ugly though. The curved lines and white color make for a relatively eye-catching console that I actually think looks pretty cool. It looks like it comes from a future where tech is more unique, and in a world of tech conformity, I’m all for it.

Despite the fact that the console looks cool, it won’t necessarily fit very well into your setup. At 15.4 inches tall, 10.2 inches deep, and 4.1 inches tall, it’s huge. I have a relatively large entertainment center and was able to fit it in. But I could easily see people having to set up a dedicated table for the device. That’s especially true for those who want to set it up vertically. Despite some of the photos you’ll see in this review, most of the time I set the device up horizontally.

On the front of the console is where you’ll get a USB-A port, a USB-C port, a power button, and an eject button. If you get the Digital Edition, that’s it. If you get the standard model, the front is also where you’ll find the disc slot. On the back are the rest of the ports, including two more USB-A ports, and an Ethernet port. Honestly, there are more than enough ports here for most.

Perhaps even more important than the design of the console itself is the design of the new DualSense controller. It’s a pretty major overhaul, especially when you look at the design history of PlayStation controllers. It’s bulkier, kind of like an Xbox controller, but it keeps all the buttons and controls that you’re used to, save for the Home button, which is now a PlayStation logo instead of a circle.

The changes to the controller experience aren’t just visual though. In fact, the biggest changes are under the hood. The new DualSense controller now offers adaptive triggers with a variable physical resistance that can change depending on what you’re doing in a game. That means that developers can make using the trigger feel more like pulling the trigger on a gun, or like slinging a web in Spider-Man: Miles Morales. It’s really cool.

Equally as cool are the improvements Sony has made to haptics. It sounds like a small change, but the haptics in the DualSense controller are just a whole lot more precise than before, and thus able to make you feel much more like you’re in the game. A perfect showcase for this is the bundled Astro’s Playroom, in which the different sides of the controller subtly vibrate as you take steps. It can range from extremely light, to super heavy. It really does make a huge difference. The only complaint I would have is that the haptics can get a little loud at times. You won’t notice that when you’re playing at any decent volume.

As cool as the improvements to the controller are, they will require developers to actually take advantage of them. At this point it’s unclear if they will. Of course, there are some games that showcase the new abilities, like Astro’s Playroom. We’ll have to wait and see if developers are still building the new features into their games in, say, two years. I hope they do.

Generally speaking, it looks modern and is laid out in a way that’s easy to navigate. Your games show up in order based on when you’ve played them, and you can easily access your full library towards the end of that list. Select a game, and you can see all kinds of information about it — from your progress, to the trophies you’ve collected, to recent news about it. I rarely actually make use of these things — I just hit “Play” and continue on my journey. But it’s still nice that they’re there, and others may make more use of them. 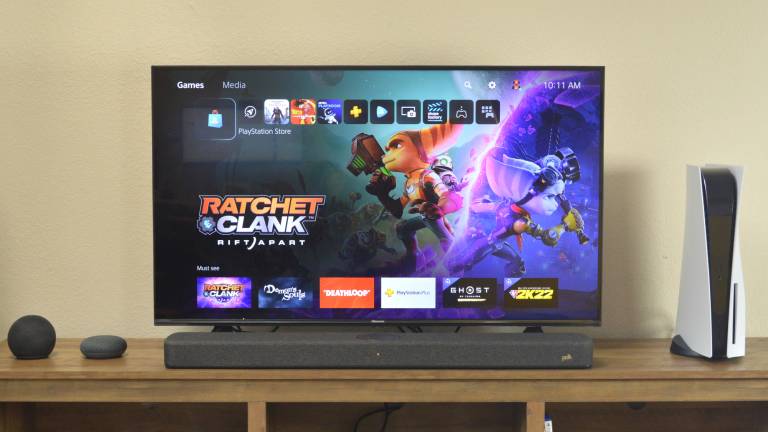 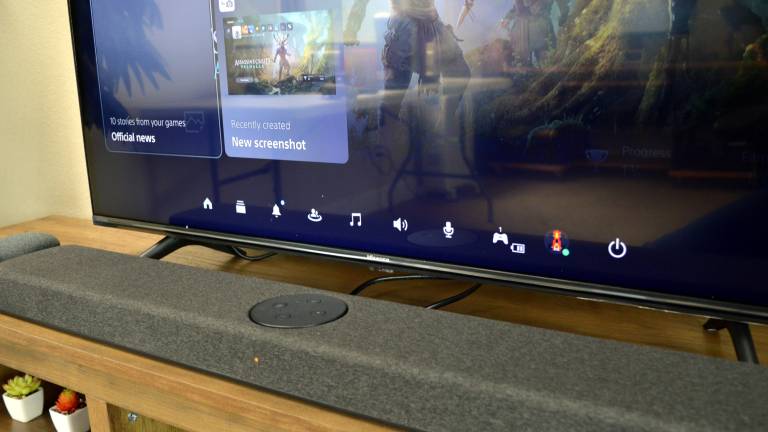 Perhaps the biggest change compared to the PlayStation 4’s interface is what happens when you hit the “Home” button. If you’re playing a game and tap “Home,” a menu appears at the bottom of the display. This allows you to perform a range of quick tasks and turn off your system, without ever actually seeing the Home Screen. Here you can check battery levels, tweak audio settings, and more. If you actually want to go home, you can also tap a button to be brought back to the main interface. It’s a nice touch, especially for those who tend to stick with one game at a time, and play it for weeks on end. That’s me. I often went weeks without seeing the main interface at all.

The only thing that’s not simple is the Settings menu. That’s not to say it’s badly designed, but there’s a lot to take in. There are some new settings to go through too. Notably, you can now set default difficulty levels for games, and choose whether games are in “Performance” or “Resolution” modes by default (we’ll go into the difference later). You can even select the camera positioning for first-person shooters. It’s a super handy feature, especially for those who find themselves having to change these settings regularly.

The performance of the PS5 may be one of the first things you wonder about — but ultimately, it’s not necessarily the thing that makes the biggest difference just yet. It does play into the experience, but next-gen performance may matter more in a year or two rather than right now.

There are some big benefits to the performance on offer by the PS5 though. Now, the console can output games at 120 frames per second, with HDR enabled, and variable refresh rates. Of course, your TV has to support these things. Considering the fact that you’ll probably keep your console for some time, you may well eventually have a TV that does.

The PS5 also supports features like ray tracing. That makes for a more realistic look overall, especially in reflections. Some games force you to choose between ray tracing and a higher frame rate. However, we’ll have to see if that becomes a standard for PS5 games, or if you’ll normally get both. Miles Morales, for example, originally made you choose, but then enabled a new mode that offered ray tracing and a higher frame rate.

One of the biggest immediate improvements comes in the form of much lower load times. I didn’t have a PS4 on hand to compare the two, but the PS5 certainly seemed a lot faster.

Generally, the PS5 offers a number of new features that should make gaming more immersive. They’re not always super groundbreaking, but they do make for a more refined experience, plus they let you spend less time waiting and more time gaming.

The PlayStation 5 is now approaching its first birthday, and as such there are actually quite a few great games available to it. Of course, that’s not to mention the massive library that was already available, considering the fact that the console supports almost all major PS4 titles.

At launch, titles like Spider-Man: Miles Morales already made a serious case for the console. Since then, we’ve seen games like Assassin’s Creed Valhalla, Demon’s Souls, and Ratchet and Clank: Rift Apart. We’re heading towards some other huge releases too. Perhaps the one I’m most excited about is Horizon: Forbidden West, which is due later this year. Next year, we should get God of War: Ragnarok, among others.

Safe to say, if you’re not already impressed by the PS5’s catalog, you should be soon. Most games are still also coming to PS4, but that will eventually change.

The PS5 looks like a generational leap, but for now, it feels more iterative. That will change. Games will slowly get better and better, and take advantage of more and more of the console’s horsepower. In a few years, comparing a PS5 game to a PS4 one should reveal a huge difference.

That’s not to say that you can’t get a lot out of the console right now though. The new controller makes for a much better experience, load times are much lower, and so on. The PS5 is better than the PS4 in pretty much every way. It’s just that for now, it’s only a little better.

But, if you’re enticed by the new games, better performance, and awesome controller, it’s worth buying. You just have to find one.

Perhaps the biggest competition for Sony comes from the Xbox Series S and Xbox Series X. I’m not so sure there are many considering switching platforms, but if you’re new to gaming, you might be deciding between the two. If that’s the case, it’s definitely a tough decision.

If you’re into the idea of game-streaming, Xbox is currently light years ahead. I expect Sony will catch up eventually, but Xbox Game Pass Ultimate allows you to play many games anywhere you want — including your Xbox.

If, however, you want to feel like you’re playing next-generation games, the importance of the DualSense controller can’t be understated — and that’s why I think the PS5 is the better option.

Yes. The PS5 may not completely change the game, but it’s still a meaningful step forward in almost every way.