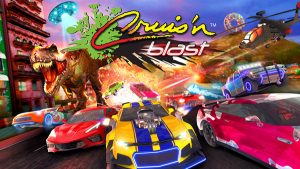 If you’re like me, then you might be looking forward to the Cruis’n series’ return to consoles. Cruis’n Blast is set to hit the Nintendo Switch on September 14th. A port of an arcade title released in 2017, this will be the series’ first console release in 14 years. Those of us who grew up with these games, or have played the arcade version, know how much fun this sort 0f arcade style driving can be.

A new trailer today shows off some of the crazy tracks you’ll be able to race through. Drive through an exaggerated version of London, survive an alien attack, or even cruise with the dinosaurs. The trailer also shows how many of these levels will have a lot of interaction, with obstacles to dodge and even attacks headed your way.

I also have to say unapologetically that I love the vibe of the music featured. So much so that I’ve been playing the trailer repeatedly in the background while writing this. It may not be “good”, but it definitely captures the vibe I remember loving from this series. Are you interested in checking out Cruis’n Blast when it hits next month? Let us know what you think in the comments below.