NBA 2K22 Error Code 727e66ac: How to Fix Connection Issue in The Neighborhood 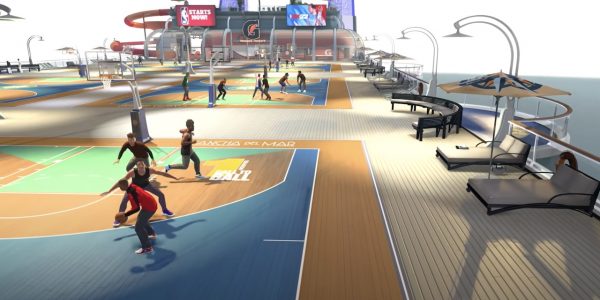 The dreaded NBA 2K22 error code 727e66ac has recently plagued the popular Neighborhood mode for PlayStation 4 and Xbox One consoles. Based on reports, it recently affected the Cancha Del Mar cruise ship and one of its excursions, Treasure Island. As of this report, there hasn’t been a patch update for the error. However, there may be some workarounds to try out to get past the issue. Here are the latest details on the error and what to try out.

With NBA 2K22 MyCareer mode, gamers can bring their 2K MyPlayers to the Neighborhood experience for PS4 and Xbox One. In 2K22, it takes place aboard the Cancha Del Mar cruise ship which is full of pickup basketball and hoops-related activities.

Ahead of the game’s launch, 2K indicated there were going to be different stops for the cruise ship. The first of those arrived this past week with Cancha Del Mar’s Treasure Island. It’s a unique setting with pirate-themed courts for games. By playing in games on Treasure Island, gamers can earn XP multipliers to level up their MyPlayer for the season.

Unfortunately, there have been reports of issues as gamers try to play in the Neighborhood and on Treasure Island due to NBA 2K22 error code 727e66ac. This affected the game once before, involving the Gatorade Elevator and a server crash.

NBA 2K22 error code 727e66ac is popping up, ruining the Treasure Island experience for many people. As of right now, there isn’t any dedicated 2K patch update to resolve the issue. However, there are some things you can try.

Previous workaround solutions involved using the Gatorade Elevator, or finding a friend to join Treasure Island through. You can also check 2K’s server status here to see if there’s a reported issue during your connection.

After that, the most important step to take is to make sure you have a strong connection to NBA 2K22 and the servers. Go to your console’s network settings and test the internet connection for this. Reconnect to your wired or wireless network if necessary.

Once you’ve determined that you have a solid working connection to the internet, consider a reboot. Reboot your PlayStation 4 or Xbox One. Once you’re back up and running, check to see if there has been an NBA 2K22 update released.

As mentioned, there hasn’t been one released yet, but due to the frustration that many gamers have experienced, it’s likely one will arrive in the near future.

Check out our NBA 2K page for more tips, tricks, guides, and news about the game.