It looks like PC gamers are in for a treat with Windows 11, with Microsoft aiming for its latest operating system to be the “the best Windows ever for gaming”.

Xbox Games Pass being built directly into Windows 10 doesn’t just give you everything on Xbox ala carte, but rather it will let gamers “play the highest-fidelity fames on all PCs”. If you sign up for the Xbox Game Pass Ultimate, then you’ll get access to cloud streaming.

Windows 11 will have other parts that will make it “the best Windows ever for gaming” which includes auto HDR and DirectStorage API, which were both unveiled with Microsoft’s next-gen Xbox Series X and S consoles. Windows Insider users received auto HDR earlier this year, but Windows 11 rolls out with it by default.

Bond said: “over 1,000 games – including Age of Empires: Definitive Edition, Rocket League, DayZ, and even Doom 64 – will be automatically enhanced on Windows 11 devices that support HDR“. 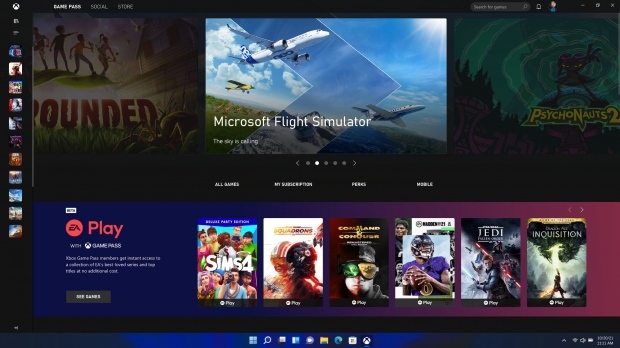 The new DirectStorage API was created for the Xbox Series X under the Xbox Velocity Architecture, super-speed transfers between the SSD and the CPU and GPU. This is driven by the magical PCIe 4.0 storage that drives multiple gigabytes per second, reducing load times in games and allowing developers to create larger, more detailed worlds.

Bond explained DirectStorage API for Windows 11 as: “DirectStorage-optimized Windows 11 PCs are configured with the hardware and drivers needed to enable this amazing experience“.

Once we have the more final, and then final version of Windows 11 released, then I will begin benchmarking as many graphics cards and resolutions that I can — exciting times ahead!