The Tekken fighter is ready to make his mark among the Nintendo pantheon! 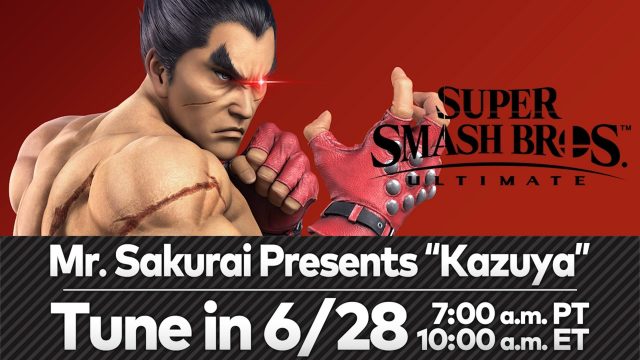 During the latest Nintendo Direct broadcast, it was revealed that Kazuya Mashima of Tekken fame will be the next fighter coming to Super Smash Bros. Ultimate. Kazuya is… intense, to say the least. If you’ve never experienced his brutal fighting style before, you can give it a look in this trailer:

Want more? Nintendo has you covered:

Tune-in on 6/28 at 7am PT for a deeper look at the new Super #SmashBrosUltimate DLC fighter, Kazuya Mishima, with Director Masahiro Sakurai. He will also reveal the fighter’s release date! pic.twitter.com/nLGBE95UrI

Sakurai’s presentation of Kazuya begins at 7 AM PST on June 28, a Monday. It’s expected to be 40 minutes in length but will, sadly, not be divulging any info about the next DLC fighter after Kazuya. Bandai Namco helped develop Smash Ultimate, so it’s pretty cool to see the developer’s own renowneded fighting game series get some representation here.