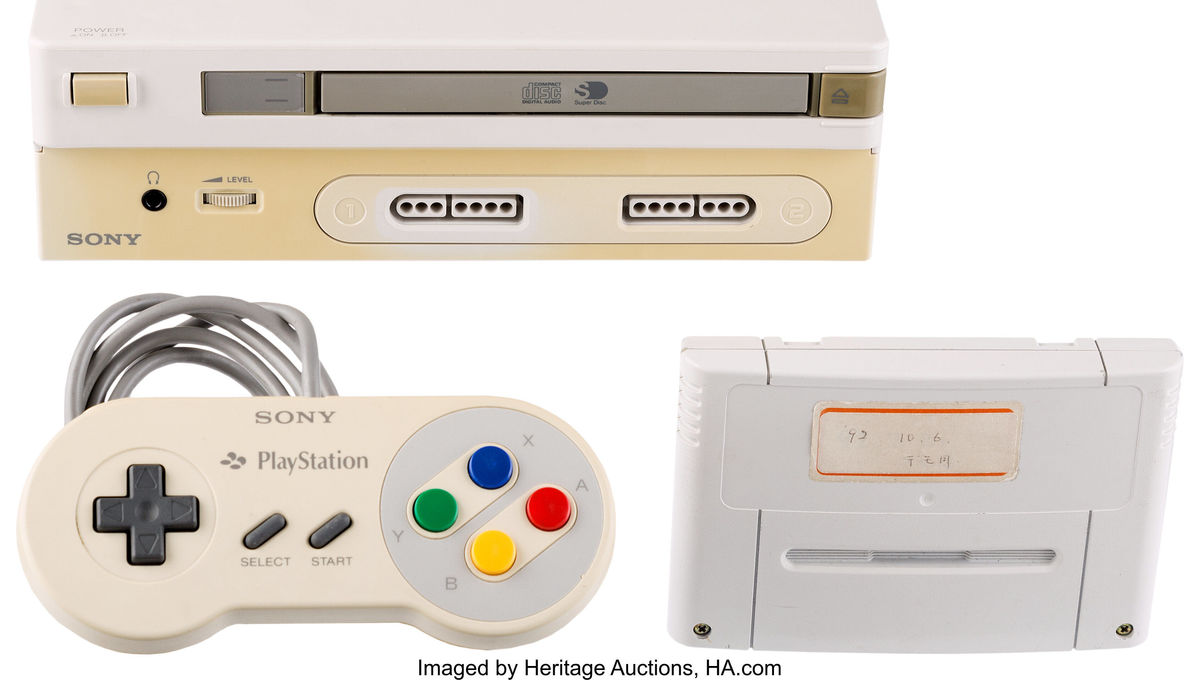 Back in the days when Nintendo was enjoying a lengthy reign as the dominant home gaming system on the block, a budding partnership between the big N and Sony yielded a prototype console that, for a moment, held the promise of shaping the 1990s video game landscape into a very different sort of place.

Now what may be one of the last surviving examples of the mythic, abandoned “Nintendo PlayStation” console (long known within the industry as the “Play Station,” extra space and all) is going up for sale via Heritage Auctions. In order to get your hands on it, though, you’ll definitely need all the rupees in Link’s giant wallet. Kotaku reports that current owner Terry Diebold already has turned down multiple seven-figure offers — including “$1.2 million from someone in Norway” — in order to let the auction market determine its current value.

The hybrid-format console accepts both Nintendo’s SNES-style cartridges and Sony’s CD-ROM discs ahead of the PS1 era, and sports controllers that, while dead ringers as SNES gear, nevertheless carry the Sony and PlayStation logos. Heritage says on the auction’s web page that the example that’s up for sale is believed to have been made sometime in the early 1990s, when Nintendo and Sony got serious, for a brief period, about teaming up to take over the coming decade’s gaming market.

“At one point this dual-branded prototype’s existence was mere myth. It is said to be the last remaining prototype of 200 that were forged from the failed joint-venture between Sony and Nintendo, two of the biggest competitors in the modern home console video game market. As such, it not only has a slot for Super Famicom games, but a CD-ROM drive,” Heritage’s description states.

What kind of games can the Nintendo-Sony hybrid play? Any standard cartridge that Nintendo’s Super Famicom (aka the Super Nintendo in the U.S.) can accept, plus an unknown number of CD-ROM games formatted for the platform (SquareSoft’s Secret of Mana originally had been planned as an exclusive game for the console, before debuting instead in a pared-down form for the SNES).

Sony and Nintendo ended their unfulfilled partnership in 1991, three years before the PS1 arrived, while Nintendo and Phillips went on to embark on a similarly ill-fated arrangement to develop a CD-ROM device as a peripheral for the SNES. Like its Sony counterpart, though, that peripheral never made it past the prototype stage.

Driving the console’s value up even further is the possibility that it may be one of, if not the very last, of its kind to survive the gaming console wars. “Reportedly, the other 199 prototypes were destroyed when the promising partnership soured and fragmented,” says Heritage, adding that this particular model has plenty of old-school provenance as the former property of former Sony Computer Entertainment CEO Olaf Olaffson.

After Olafson left Sony and eventually joined the bankruptcy-bound Advanta Corp., the company’s assets “were organized to be liquidated, [and] this Nintendo Play Station prototype that Olaf reportedly left behind was mixed into a mystery box lot that was auctioned by the company. Had this not have happened, who knows when the world would have learned of this prototype’s existence!”

As it stands, we’ve got about two months to scrape together all the gil, rupees, and munny we can get our hands on before this rare artifact of a gaming era that never materialized hits the auction block. Heritage opens bidding on the no-reserve console listing starting Feb. 27 — so now’s the time to get your bank on speed dial.