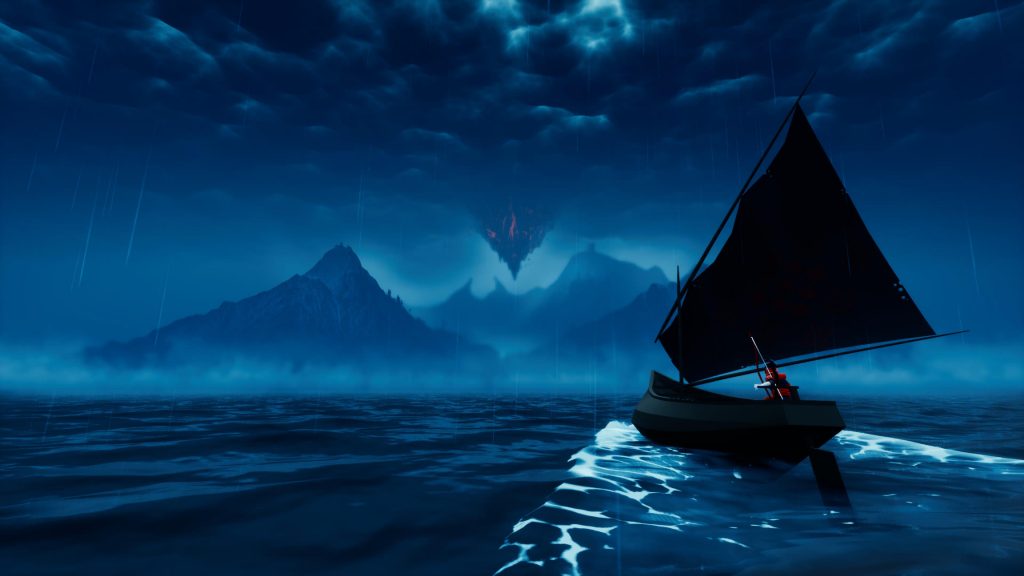 This is one of those times in the generation cycle where I absolutely love being a gamer. The current generation is in its handshake period, gracefully stepping aside as the newer, shinier thing comes forward to take both the contents of our wallets and time in equal measure. This generation change has been smoother than most, with the PS5 being capable of playing/upgrading PS4 experiences as opposed to leaving the previous console and the wealth of experiences in the dark in favour of a clean slate.  We are also seeing just how much easier it is for developers to bring their titles to the new platform, without any of the proprietary nonsense that plagued gaming in the past.

This is around the time in a console generation where the previous machine gives off that last hurrah. This is when you would see late bloomer examples such as your God of War 2’s, your Resident Evil 4’s and Shadow of the Colussus(‘s). Only this time, the games are also readily playable on the new hardware, with a ton of visual and performances bells/whistles straight out of the box. So, while The Pathless makes for a great launch title for the PS5 (for reasons we will get into), it can also be considered one of the late shining examples of the PS4 generation.

The thing about the previous three examples I provided is that they all come from the triple-A, the guys that act as the big-dogs of the gaming industry, the ones you expect to release an amazing experience with a bit of hardware mastery. Instead, The Pathless comes from Giant Squid, an indie developer previously famous for scuba-em-up Abzû, a rather tame and contemplative game by usual gamer standards. Squeezing their latest effort into the same list as Demon’s Souls or Spider-Man: Miles Morales as a launch title may seem a bit foolhardy, but considering the quality on display here, I feel that The Pathless deserves the attention. Not only as a great game, but also as a sign that indie efforts deserve as much time in the spotlight as the bigger budget releases on the radar. 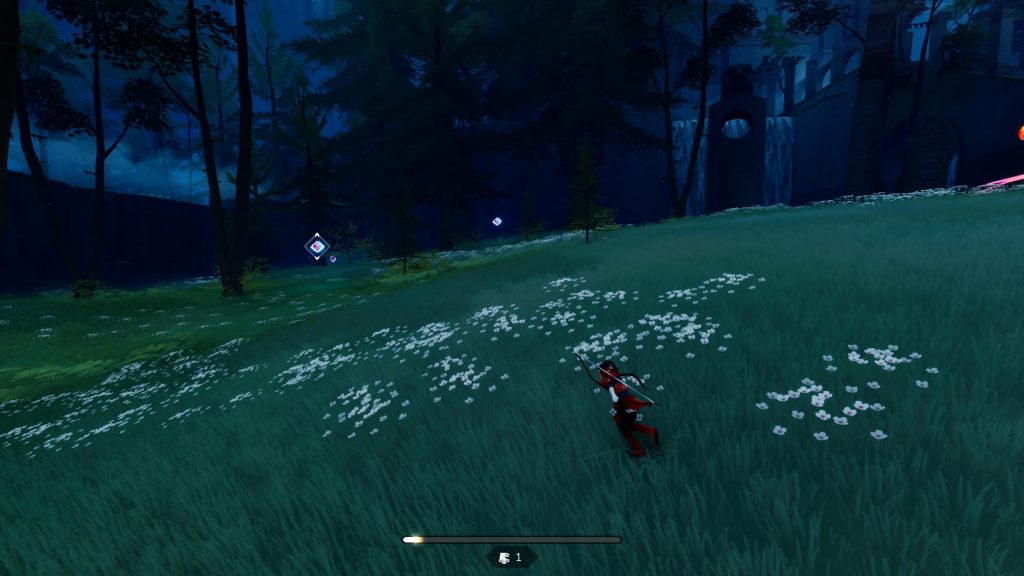 In The Pathless, you play as a lone hunter who has travelled to a cursed land to cleanse it of a corruption that has been brought about at the hands of the god slayer. True to his name (well, almost) The god slayer has set about the world, corrupting its inhabitants while also enslaving the guardian deities that protected the land. As a result, they now wander the barrens of each peninsula, spreading the corruption and attacking the hunter if they get too close.

To be able to even approach one of these beasts, the hunter must traverse the land, solving puzzles to gain tokens that unlock towers surrounding each creature. I know what you are thinking when you read that sentence, but I am glad to say that this is not your typical Assassins Creed affair. There is no in-game map or sea of icons to navigate. For the most part, The Pathless is stripped down to three core tenets: Exploration, traversal, and environmental puzzles. To get a proper lay of the land, you must put your foot to the floor and discover landmarks yourself and to get there, you have by far one of the most satisfying mechanics I have seen in an open world game.

Instead of just hoofing it or riding on a mount, dotted around the world are floating talismans. When shot by the hunter with their bow, they grant both a boost of speed and a chunk of stamina for the hunter, represented by a bar below. To keep up the pace, the player must constantly shoot these talismans in a somewhat rhythmic fashion. Explaining it takes more effort than the actual practise, this is a simple case of pulling on R2 (with satisfying feedback from the Dualsense) whenever nearby to one of these floating eyes and letting go. What sounds like something that could get unwieldy feels exhilarating in practise and after a very short time, second nature. 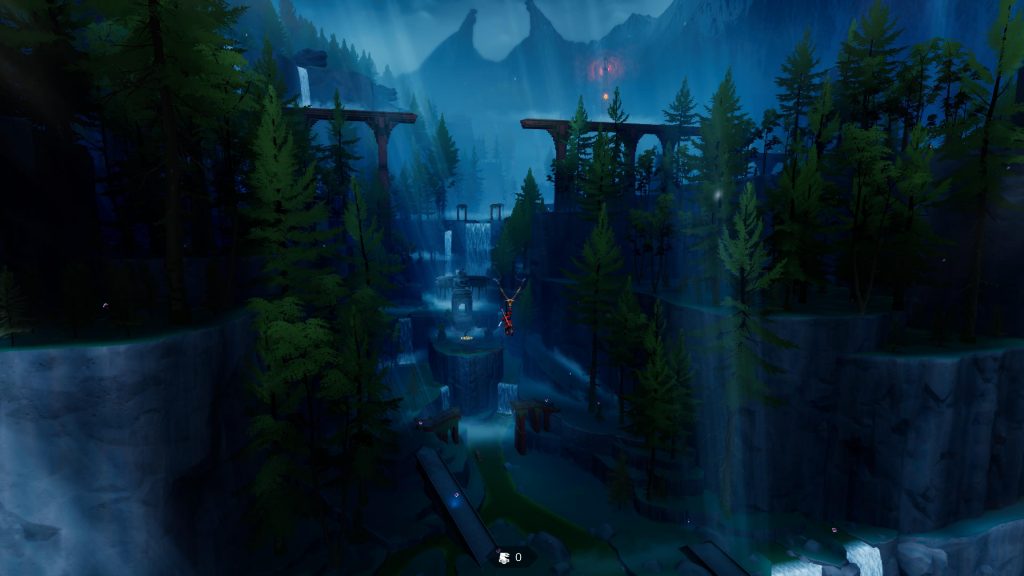 To help further in movement, early in The Pathless, you receive a sidekick in the form of an Eagle. This feathered friend provides the ability to glide over vast distances or to give the player height with the flap of the bird’s wings. Again, this feels like second nature when progressing through and a great addition to the core movement mechanics. Both the bow and the Eagle come in handy when it comes the game’s myriad of puzzles that lay across the land. These can range from the rudimentary to the brain scratching, but predominantly these are quite like the shrines that litter the map of Zelda: Breath of the Wild. These small puzzle areas won’t tax a seasoned gamer but will provide a chance to slow down and contemplate the next action, letting the player work out a solution in their own time.

A good example of how some of these puzzles play out comes in the form of a bathhouse that I happened upon in my playthrough. In this, I had to move a circular target hole up to the top of a room. To do this, I had to solve three other puzzles lower down in the building. This saw me shooting arrows through fire to light a various torch and then a kiln in one room, then in the next I had to navigate weights onto various pressure switches while shooting through stone circles to activate switches. Each puzzle area either rewarded one of the tokens for the towers, or in this case provided me with additional power up points that gave my eagle one extra vertical boost.

While the game world itself can feel somewhat empty between the puzzles or the big bad of the area, I found this to be to the game’s strength. The Pathless is stunning to both look at and move through. Again, this feels a lot like Shadow of the Colossus, where the large landscapes provide moments of contemplation and exploration which are unmarred by needless exposition, annoying side plots or busy work. It is simply you, your eagle and whichever direction you want to go in. 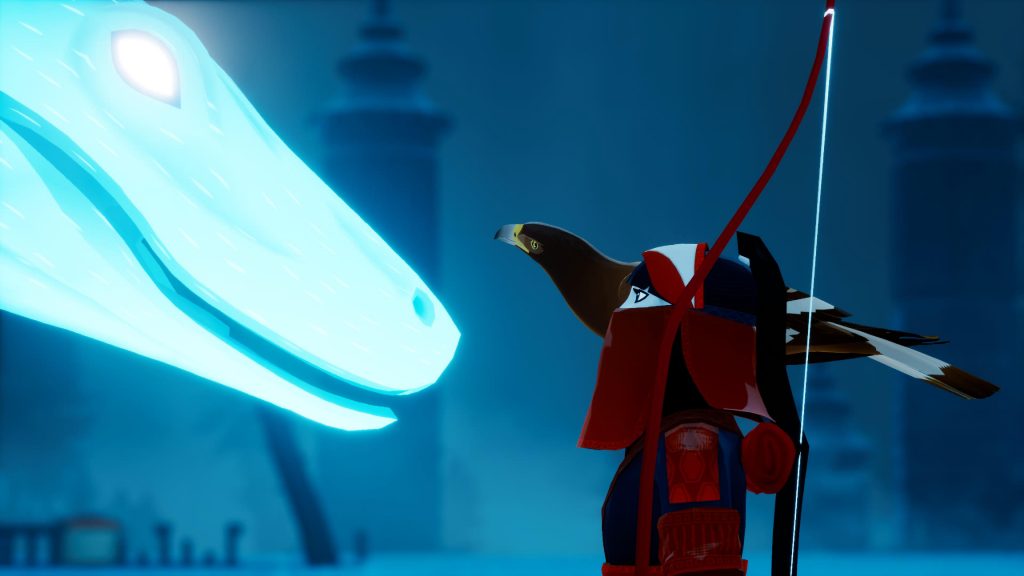 Of course, you can’t mention Team Ico’s finest in comparison without large creatures or boss fights. At any time during each area, you can encounter one of the beasts before your big fight. These are at first represented by a large, enveloping storm of blood red clouds that get thicker when you are near them. If you get caught up in the storm, then your eagle is flung away from your reach. To get back to normal, you must stealthily skulk through the fiery landscape while the boss of the area hunts for you. If you get to the eagle, then you are rewarded with normality. If the boss catches you, then you lose some of those power up points that you have collected along the way.

I absolutely loved these sections. Atmospherically they are a stark contrast to the relatively tranquil areas that I had been exploring beforehand. The hellish firestorm is a suitable backdrop for the beasts and creates a sense of danger and urgency, while also introducing you to the boss in a unique way. These moments only happen when you are close to the creature in the world, so you could almost completely bypass these if you know your way around, but having these moments happen in this way gives off a palpable sense that you are always being hunted, especially when the creature jumps from position to position in the area.

It gets better when you are ready to take on the creature also. After clearing three towers of corruption, the towers triangulate a beam onto the beast and weakens it enough for you to close in. Each boss has a three-phase encounter, each of them starting with the hunter giving chase. This is by far the most exhilarating thing I have experienced in a game of this type. Combining the movement mechanics and combat, the hunter must get close to the running beast, taking out weak points on each side of it to bring them down. Once weakened this way, the boss enters an arena style encounter, with admittedly conventional attack patterns but with impressive visual flair all the same. 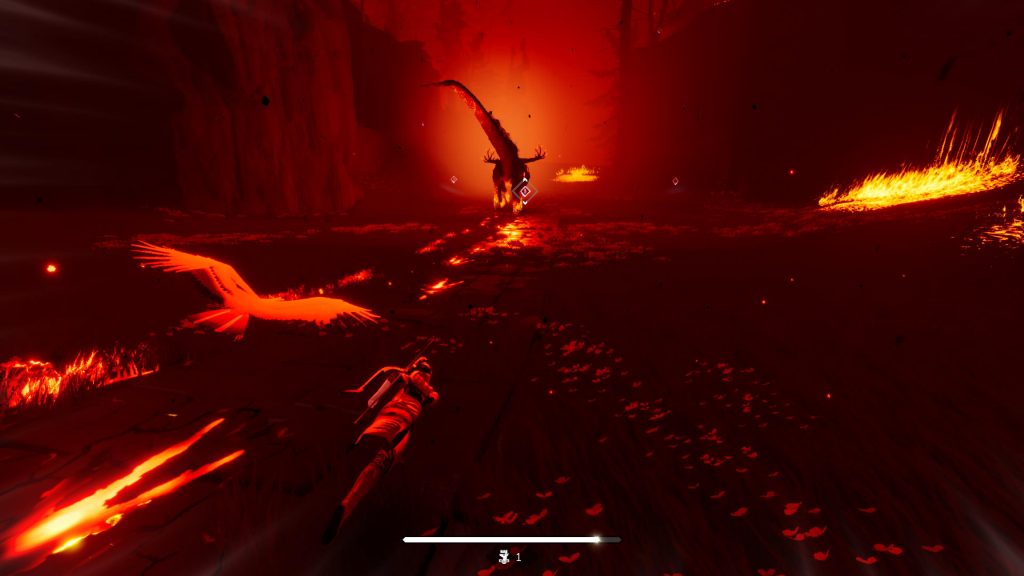 After exploring a few areas and boss encounters, I realised something else in my playthrough. Your character can’t really die or must see a loading screen because of failure. On the third boss, I realised this when instead of seeing a game-over screen after taking a ton of damage, the hunter was instead thrown out of the arena. After a moment of being winded, I made them jump back in and the encounter started again from the start.

Now this is something I think will be contentious for some as this means that there is a lack of real challenge or stakes in an encounter, but I found this approach to be novel and well executed. For one, I didn’t get the archaic continue screen or “you died” text, instead the hunter did what you are virtually doing anyway and that is dusting yourself off and getting back in the ring. I found this also to be somewhat well balanced as well. In each fight, if you get hit by an attack, you lose your chance shoot your opponent. Meaning that skilful play and projectile avoidance is still a must to get anywhere in an encounter.

Of course, when all is said and done, while the game world is large, not having a traditional death mechanic does make the experience somewhat short. My first playthrough with me aiming mostly for the objective from start to finish saw me getting through the adventure in around five hours. I know that If I also collected the rest of the beast tokens and see everything else, it would take me a few more. But honestly, this makes the game even more appealing. It speaks to the core idea of the project and that is to let the player carve their own path. Also, the worst thing a game with unique mechanics can do is outstay its welcome. To me, The Pathless is a short, sweet, and simple game that at no point deviates from being an exhilarating or beautiful open-world adventure. The game is indicative of not only a great start to the new generation but also a fine way to say goodbye to the old. 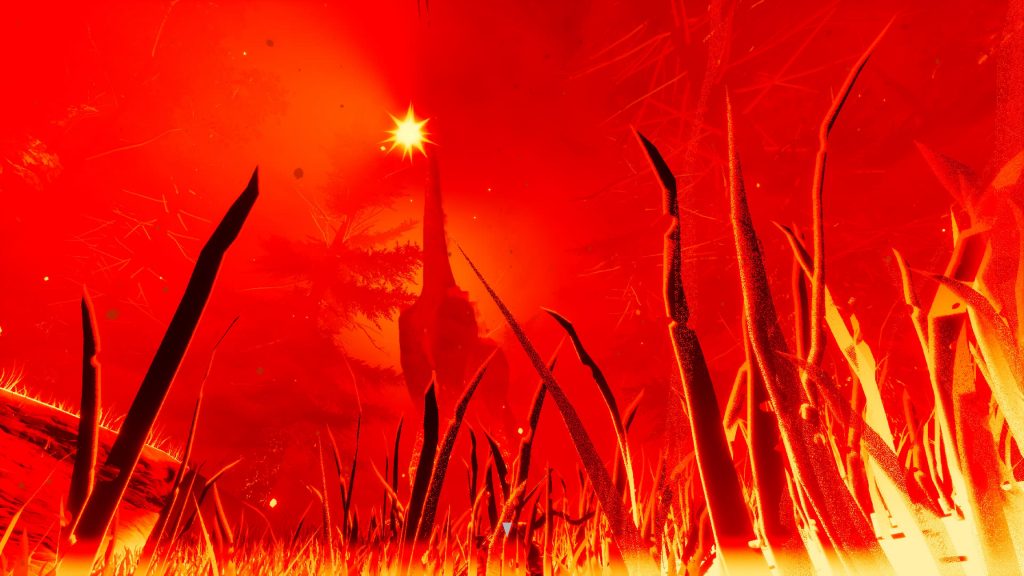 Note: This game was played using a PS5 console and set to the in-game performance mode. Your experience may differ if you play on PS4/PS4 Pro or set to fidelity mode on PS5.

The Pathless
Pros
+ Visually stunning with large draw-distances
+ Great sense of speed and pace, with no frame dips or stodginess
+ Satisfying core gameplay loop and traversal mechanic
+ Keeps things short, sweet, and simple.
+ Respects the player to work things out, as opposed to spelling out what to do
Cons
– Lacks a real challenge
– Short if you beeline for objectives
Summary
Giant Squid starts the new generation strong with The Pathless. A short, sweet, and simple adventure that marries contemplative exploration, with uniquely satisfying movement mechanics that function in both a visually stunning open world and the setpiece boss encounters. While the experience may be too easy for some, this game is worthy of attention in the crowded launch line up. Not only as a great title, but a shining example of what indie developers can bring to next generation gaming.