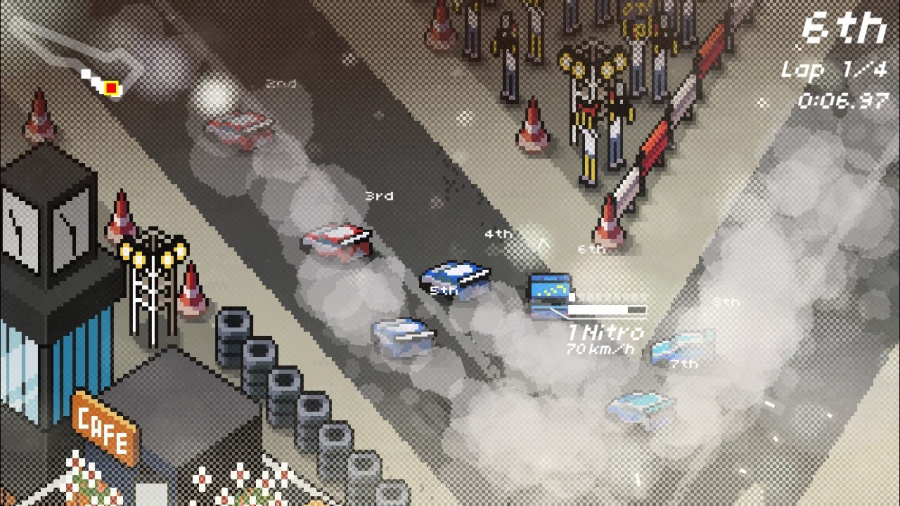 Mario Kart has taught us to expect a close-up, over-the-shoulder view of our arcade racers, but it didn’t always used to be this way. Back in the NES days, the likes of R.C. Pro-Am and Super Off-Road offered a birds-eye view of the action.

It’s this old-school racing spirit that developer 21c. Ducks seeks to evoke with Super Pixel Racers. Looking down on your pixellated rally car, like a drone covering the World Rally Championship, there’s an instant warm and fuzzy retro feel to the action. While the cars you’ll racing are all pretty grounded approximations of classic rally cars (Subarus and Mitsubishis, you know the drill), this is anything but a racing simulator. Your car auto-accelerates for one thing, while using a drift button to slide around corners will accrue boost for your nitro.

There’s a unique feel to the handling model, too. A jab of the aforementioned drift button will send your car’s back end out, prompting a long lazy turn. But if you’re more aggressive with the button, you can gain traction and use it to carve into the turn and cut off the corner, almost like the motorbike handling in Mario Kart Wii. 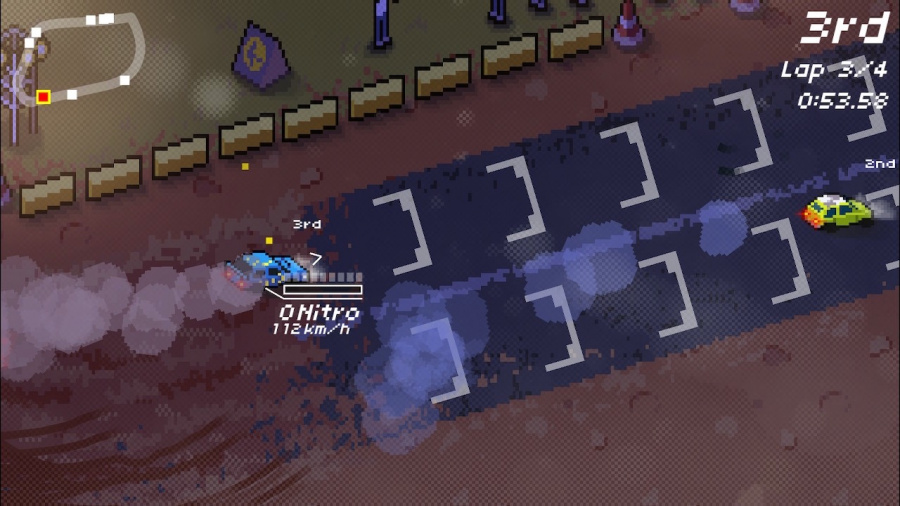 The developer recommends that you use a control method whereby your car steers in whatever direction the left Joy-Con stick is pointing, but we found this difficult to get our heads around. Far better, to our mind, is the alternative ‘Classic’ method, whereby left and right on the stick will rotate your car anti-clockwise and clockwise respectively. It’s the method top-down racers used to take, and it works a treat here.

The races you’ll encounter during the game’s single-player career mode, meanwhile, only occasionally incorporate twisting point-to-point races like real rallying, and rarely leave you alone completely via the odd time trial. Certain challenges even require you to actively ram into your opponent to secure take-downs, like some long-lost 16-bit Burnout prototype. We don’t remember Tommi Mäkinen ever powering into the back of Carlos Sainz in such a way.

Other challenges see you using that drift button to rack up as large a score as possible. Then there are the meat and potato rallycross races, which gives you a full field of competitors to pip to the post across a mixture of dirt and tarmac surfaces. In between races you can head into the garage and spend your winnings on improving your ride. Here you must plough funds into four self-explanatory categories: Top Speed, Acceleration, Nitro and Durability. You don’t need to worry about saving up to buy alternative cars though, as each unlocked racing class brings with it a single representative car to drive. These automobiles get ever faster, and whisking around the game’s thirteen tracks at breakneck speed in one of the nippier classes is a real thrill. 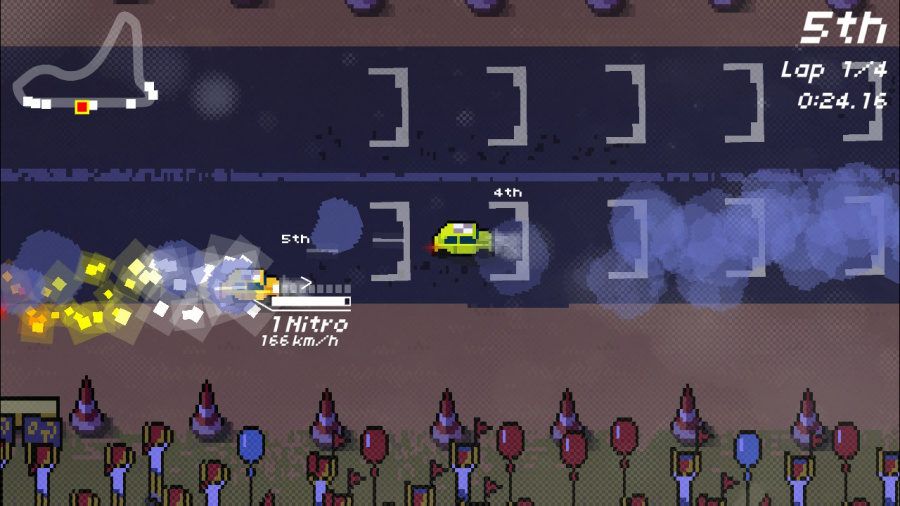 Aside from the Career Mode and Free Race options, Super Pixel Racers supplies a fairly comprehensive multiplayer offering. There’s an online mode, but this being a fairly modest indie game, you’ll struggle to get a full field at the best of times. Far better to bring out Super Pixel Racers during your next local multiplayer meetup. The game’s simple retro charms are perfectly suited to some casual couch competition, and it’s well set up to support such a thing, with split-screen for up to four players in both docked and handheld modes. Besides regular races, you can also embark on a Battle Mode of sorts, which plops you into an arena and asks you to ‘hunt’ your fellow players with a well-timed nitro boost.

Special mention should go to Super Pixel Racers’ presentation. There’s nothing outrageous here from a technical perspective, but we’re fans of the 16-bit pixel art style. Some might find the rudimentary animation a little too crude, but it takes us back to an earlier, more innocent time of arcade racing. The audio, too, is excellent, with the kind of driving synth soundtrack and high-pitched engine noises that speak to the classic era of top-down racers it’s trying to emulate. 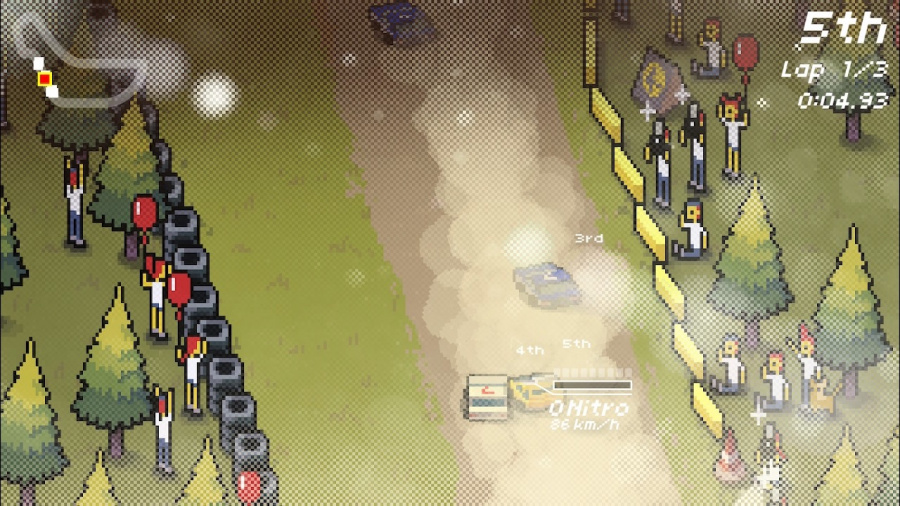 If we’re being frank, both of these top-down racers are flat out better, richer games than Super Pixel Racers. That said, you might just warm to the 16-bit charm of Super Pixel Racers a little more. Each offers enough of a distinctive experience in terms of handling that you’d be more than justified taking all three for a spin.

Super Pixel Racers offers a simplified brand of top-down arcade racing, with an intriguing handling model that’s simultaneously casual and highly demanding. It might not be the richest, deepest or most rewarding game of its type on Switch, but it’s a worthwhile experience for those looking for some solo and local multiplayer arcade kicks.