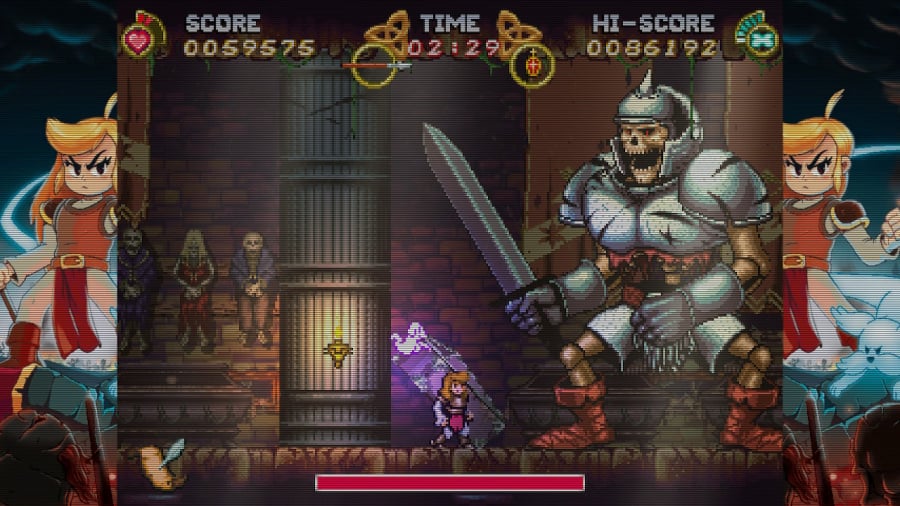 Capcom’s legendary Makaimura series, better known to the West under the titles Ghosts ‘n Goblins and Ghouls ‘n Ghosts, has been a source of inspiration to many, many pretenders throughout gaming history. Its intoxicating mixture of vivid graphics, unique levels and punishing difficulty have made it both memorable and venerated. Ports excepted, there aren’t many games in the series (with no new ones since the PSP’s excellent Goku Makaimura Kai), so it falls to the indies to deliver a new experience.

Battle Princess Madelyn Royal Edition isn’t even the first attempt by an indie developer to capitalise on the lack of Goblins. Locomalito’s excellent Cursed Castilla is already available and does a terrific job presenting something clearly indebted to Capcom’s classic franchise while also feeling fresh. And, of course, we’ve seen Madelyn before in her original, decidedly non-Royal release. What does this remixed version bring to the table? 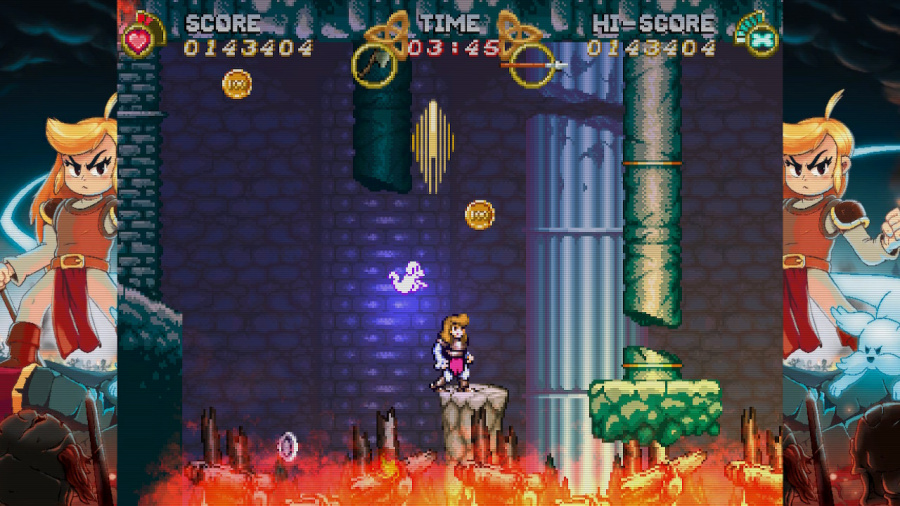 Interestingly enough, it’s more about what it takes away – the misguided, confusing and dialogue-infested Story Mode of the original release (a casualty of Kickstarter stretch goals, leading to feature creep, leading to a bloated, unsatisfying game – a dance as old as time) has been excised like a bad tooth, replaced with an expanded and fully redesigned Arcade Mode that’s an undeniable improvement. Play control is responsive and generally feels good, with Madelyn’s movement being smoother and more free-form than that of Ghouls ‘n Ghosts’ Sir Arthur.

Madelyn, you see, can actually change direction in mid-air, as well as performing a double jump. And you’ll need to get good at it almost instantly because there are some tricky aerial moves required as early as the second stage, the game having you sail under thorns only to have to pop back up to avoid a bottomless pit. The different weapons you can collect all tend to have foibles that have to be accounted for, which lends a little more strategy to the proceedings as you switch between your two most recent pick-ups. It’s tricky stuff, but the responsive, thoughtful play means that dying feels like your own fault most of the time. 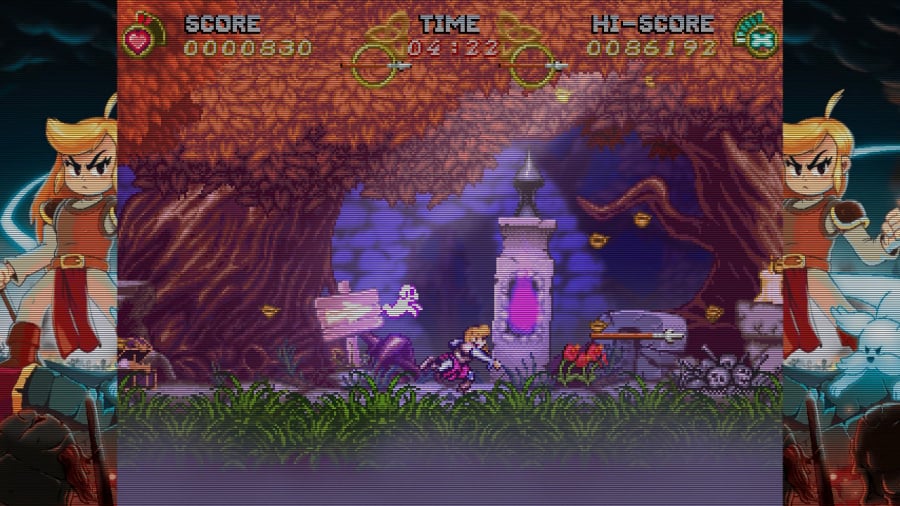 Unfortunately, that “most of the time” is doing a lot of work to patch over some design deficiencies here. “Most of the time” isn’t good enough for a platformer that’s difficult enough to begin with. The problems are largely to do with the graphics. Battle Princess Madelyn looks great, with lovely chunky Wayforward-esque pixel work and neat animations, but it also kind of resembles a weird, patchwork bootleg at times as the backgrounds, foregrounds and enemies can sometimes seem to blend together.

The level design – when you can discern it – is generally fine, but we lost more than a few lives because it was simply unclear what was and wasn’t a platform, and that’s kind of a kiss of death for this genre. In addition to this issue, the boss battles are often shoddy to the point of incoherence, it being seemingly random when a boss is and isn’t safe to be around. There are even sections where it’s so dark you can’t really see the enemies – and who wants to deal with that in a linear arcade platformer? In these games it’s absolutely crucial that the terms aren’t obfuscated by this kind of slack pathing – it’s the difference between a good platformer and a bad one. 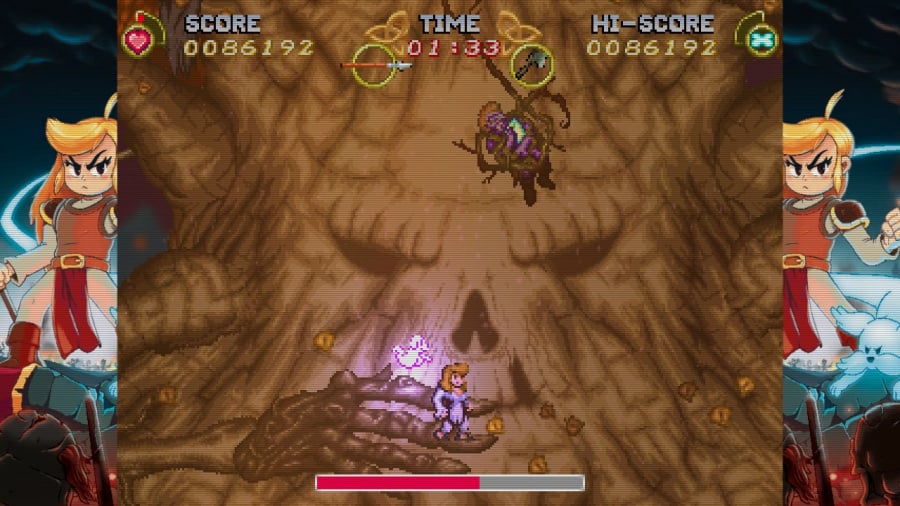 It’s a shame, because broadly speaking Battle Princess Madelyn Royal Edition is fun to play. In terms of game feel and the sheer volume of enemies, It’s more reminiscent of the Midnight Wanderers portion of Capcom’s multi-game arcade title Three Wonders than it is Ghouls ‘n Ghosts, but this is no bad thing. The music is tremendous too, coming in both “Orchestra” and “Arcade” flavours – the latter is particularly evocative of the CPS2 spirit. An additional “King Daddy” mode offers a tougher, melee-based additional challenge, and the sheer focus of it all is quite refreshing when so many games succumb to the temptation to inflate their playtime with artificial-feeling longeurs. There’s a good amount of game here, and a lot of care has clearly gone into it. Sadly, this time, that wasn’t enough to salvage it from the leaden, tiresome original.

Even on this second go-around, Battle Princess Madelyn Royal Edition is not up to scratch. It’s almost maddening because the stuff that works is very enjoyable. The core game is fun, with a pleasing set of influences coming together to make for a knockabout, challenging time. A host of major and minor flaws – and the notable removal of the non-linear Story mode from the original release, which could have offered more enjoyment if its issues had been fixed – make this a nostalgia trip we can’t recommend. It’s a genuinely disappointing example of a game that’s so close to being a good time, but its problems completely spoil the fun. A little more tightening up and Battle Princess Madelyn would be a bit of a cracker, but we sadly suspect that after this Royal Edition there isn’t going to be a third time around the block.