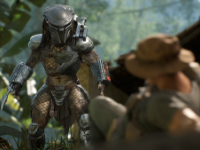 The release date for Predator: Hunting Grounds is set down for April and we have a look at the various types of Predator we will get

It looks like April is filling up with all kinds of titles as it looks like Predator: Hunting Grounds is hitting the PS4 on the 24th of April 2020 and adding to the asymmetrical shooter genre. All of which also came out during the State Of Play event where IllFonic offered up this release date as well as a new trailer for the game. The usual we have been seeing here as of late, but this one offers up a fun twist as it looks like there will be a few different types of Predator out there on the hunting grounds. All of which handled through different classes.

I guess the game would get a bit boring if we only had the one Predator to stalk around and only the weapons to mix things up. It would fit the way things have gone in most of the films out there, but in a video game setting, it is nice. More so when you see that each will offer up various buffs and everything. While the finer details are still cloaked, we have the Hunter, Scout, and Berserker classes for the Predator here. Each of which follows what you would expect the name to bring us. You can see a bit more of each in action as they traverse the jungles and collect all of those spinal trophies that are out there.

In addition to all of this, we also have a look at the different versions of Predator: Hunting Grounds that we will be able to pre-order and pick up. The pre-orders bringing to the game a skin for the classic ’87 film and the fun mini-gun that we see mow down a good chunk of the jungle in said film. Then we have the Digital Deluxe Edition of Predator: Hunting Grounds that brings a few more skins and weapons for the game. All while letting you have a nice XP boost for two days and various other in-game bonuses. Also, a digital art book and comic to enjoy when not playing the game.

Play an asymmetrical multiplayer shooter that pits man against Predator. As part of a 4 person Fireteam, complete missions before the Predator finds you. Or be the Predator and hunt your prey.

Pre-Order to get bonus in-game items at launch inspired by the original movie: Enter a world that looks and feels completely authentic to the lore of the Predator universe. The lush jungle comes alive with the sights and sounds of military bravado moving toward their objective. While up in the trees, a flash of light and an ominous clicking sound belay that the team is about to face deadly opposition. From the epic Predator theme song to the signature light-bending cloaking and thermal Predator vision, fans of the Predator-verse will revel in both familiar and new canon.

As a Fireteam member, wield a state-of-the-art arsenal, from pistols to assault rifles, shotguns, grenades and heavy weapons. As the Predator, hunt with deadly alien tech including the shoulder-mounted Plasma Caster, Combistick, Smart Disc, Wrist Blades, and more.

Drop into several conflict zones in South America, treacherous, thick with ranging trees and sprawling undergrowth. Guerilla soldiers are well-camouflaged between guarding shanty hide-outs at the water’s edge. Whether a Fireteam moves as a unit or takes a strategic split approach to reach each objective, the rich setting offers a diverse environment to perfect your approach. For the Predator, the trees are perfect for using otherworldy skills, crawling up tree trunks and stealthing through branches to stalk prey with frightening speed. Are you ready to jump into the role of the Predator in April or will you be aiming to take down the beast as part of the fire teams? Do you like the various classes we have here and do you think we will see more as time progresses? Would you like to have a physical edition of the game with a mask as the developer has done in the past with their other title? Let us all know down in the comments and then feel free to discuss. For more on Predator: Hunting Grounds, Be sure to keep checking back in here. We will keep all of those updates coming at you as best that we can.

With screen time up, look for video games that incorporate exercise

Gods Will Fall, a dark fantasy adventure from Deep Silver, is coming to Switch next year