Innovation is nothing new to Nintendo. Innovative new game types, however, is something Nintendo does not always excel at. Often, gamers will see iteration after re-iteration of the same tired Nintendo games and mechanics. In 2015, Nintendo released Yoshi’s Woolly World, a Yoshi’s World game with a new aesthetic makeover and some cool new mechanics. The game was good, but it suffered from a few flaws (as you can read in our review). Then Nintendo announced a 3DS port of of Yoshi’s Woolly World with the addition of Poochy levels, aptly naming it Poochy & Yoshi’s Woolly World. But was the addition of a Poochy amiibo and levels enough to keep the same Woolly World experience fresh, or does the game unravel?

Poochy & Yoshi’s Woolly World follows the story of Yoshi, whose little yarn town is ravaged by Kamek, the flying wizard who, at the inception of the game, unravels all but two Yoshis and bags up the yarn. Surviving the mass unraveling, Yoshi sets out to reclaim and restring his fallen comrades. Set across six worlds (each with eight stages), Poochy & Yoshi’s Woolly World is filled with beautiful settings and interesting gameplay. 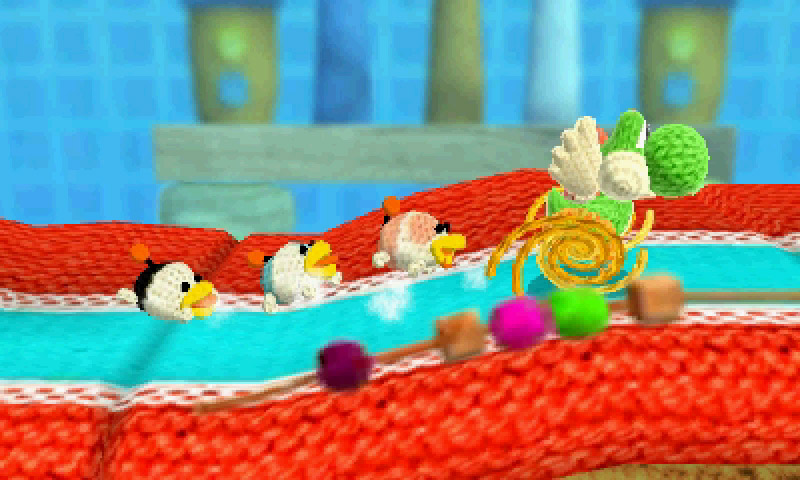 Woolly World plays similarly to other Yoshi games. Outside of its cool craft aesthetic, Woolly World sees Yoshi and his poochy friends slinging yarn, unraveling foes and obstacles, and navigating through simple level designs. Mechanically, the game excels on the 3DS, and its 3D visuals work well. Rarely did I encounter situations that became unnecessary obstacles due to controls. Typically, throughout the course of the game, Yoshi will need to navigate through maps by flinging yarn at enemies and empty canvases (used to create stairs, tubes, pathways, etc.), jumping and platforming through obstacles, and defeating giant boss enemies. Scattered throughout some of the world stages are extra bonus modes where yarn Yoshi transforms into various forms (like a dolphin or a giant, for example) to clear each segment in a set amount of time. These particular instances serve as very refreshing pieces of the game that alleviate some of the monotony of the overall experience.

And this is Poochy & Yoshi’s Woolly World’s biggest flaw. The game comes loaded with a decent amount of content surely to keep you busy for a number of hours. Unfortunately, outside of aesthetic changes in each world, Woolly World doesn’t exactly add anything new to the mix. Each stage is set up in a similar fashion to the one before, and it even feels like obstacles are situated in a similar manner. This wouldn’t be a huge problem if the game was short, but with 48 stages in total (not including the new Poochy races), the game can become tedious to complete. The game grew so dull, in fact, that I became anxious to finish it and purchased a few skip levels with my in game currency. 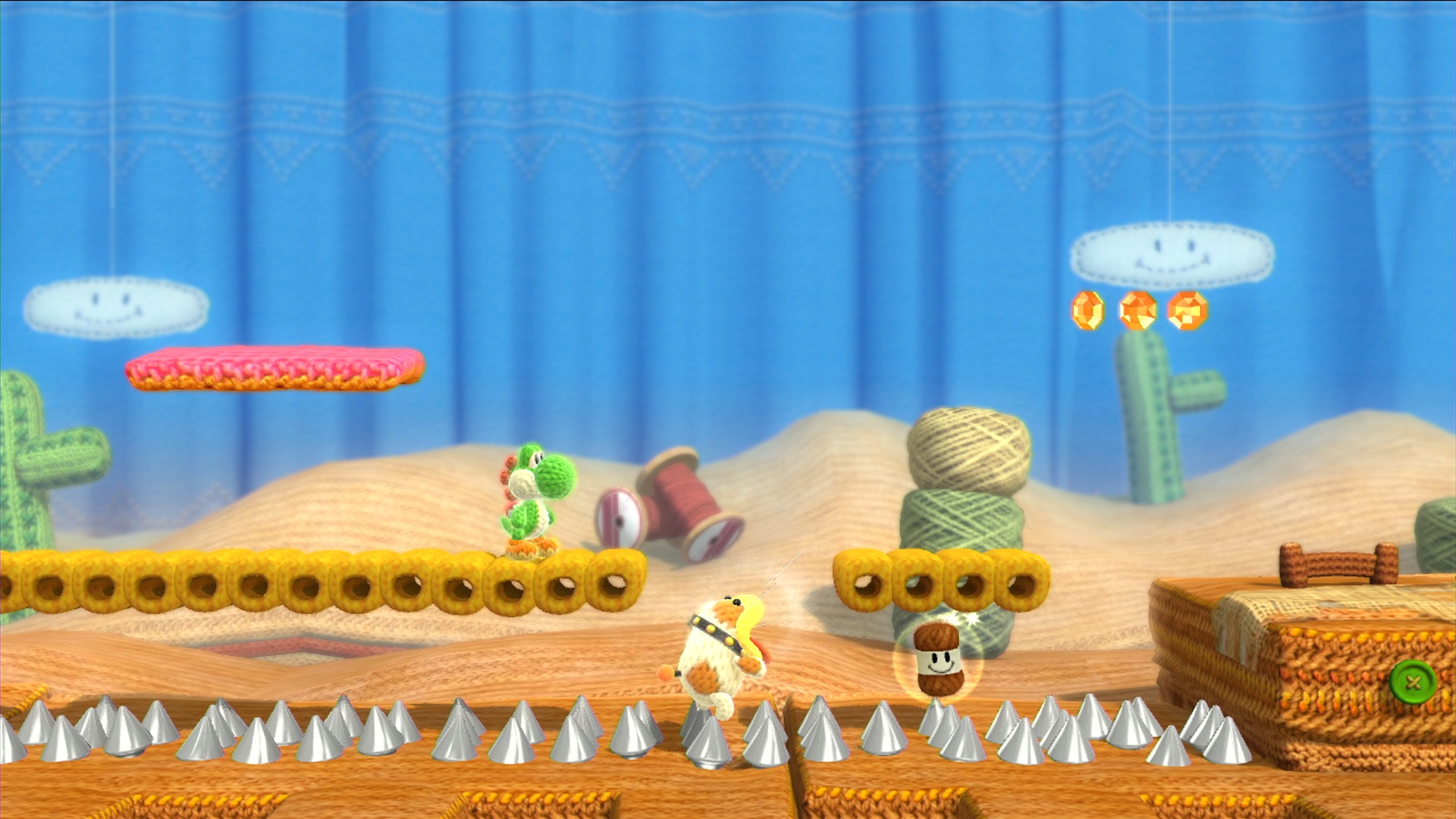 Still, there is a lot to enjoy about Poochy & Yoshi’s Woolly World. As I’ve already mentioned, Woolly World is aesthetically pleasing. With its crafting and sewing themes, Woolly World wrapped me up before I ever had a chance to play it. I’m a fan of visuals (they don’t have to be hyper realistic, but a good aesthetic cements itself in my memory), and Woolly World hammers the nail on the head with its world. Every minor detail is accounted for visually, and the bright colors of your yarn Yoshi and surroundings thrive for it.

Sound in Poochy & Yoshi’s Woolly World is a mixed bag. While the first half of the game felt lively and inspired, even relaxing (as the theme of the game would suggest), the latter half – perhaps due to my lethargy with the repetitive content – fell flat. Don’t get me wrong; the music actually fit each world well, but where the first few worlds resonated with heart, the remainder failed to live up to my expectations. Outside of the soundtrack, the overall sound direction of Woolly World works well. Sound effects and ‘voices’ fit the world (as they tend to in the Mario universe), and even Baby Bowser adopted the cute noises apt for a game of its ilk. 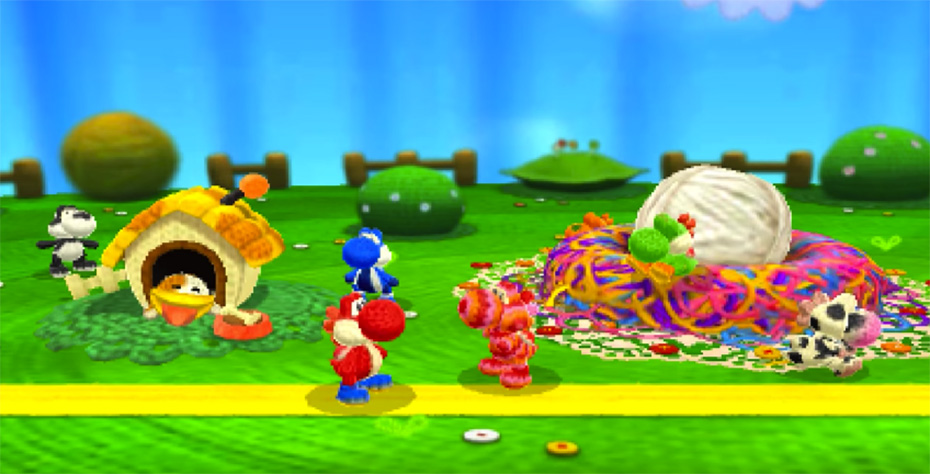 But why would owners of the Wii U version of Yoshi’s Woolly World want to or need to own the 3DS update? The content is identical, while the game setup is modified for the 3DS, so there isn’t an entirely new experience to play. Outside of the game being mobile, the only new feature of Poochy & Yoshi’s Woolly World is the Poochy races (and the addition of mini-poochy pals in easy mode). In these races, you control Poochy and sprint through various maps, attempting to beat time scores and completing various missions that unlock as you speed through each level.
On the whole, Poochy & Yoshi’s Woolly World is a worthwhile purchase for those who haven’t experienced the original on the Wii U. There is a ton of content for its $40 price tag, especially if you’re a completist (collecting all the yoshis, sunflowers, stamps, etc. can take some time). While the levels grow stale, the sound direction helps to alleviate some of the burden toward the end of the game (though the final world music was, in my opinion, terrible). Featuring enough challenges for adults to enjoy and allowing for children to have a great time, Poochy & Yoshi’s Woolly World is a beautiful but mixed bag of yarn.