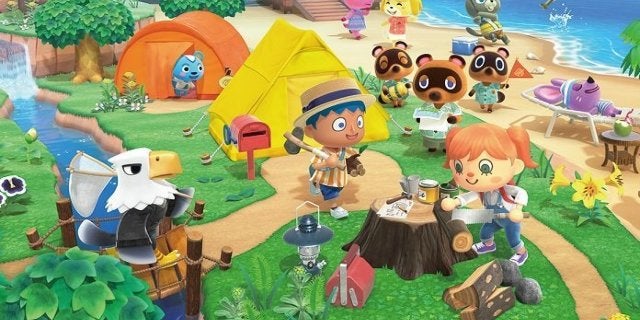 Just a few days after a new trailer for Animal Crossing: New Horizons surfaced alongside a look at the game’s box art, Nintendo has shared yet another preview of the upcoming game and the island players will find themselves on. The new image of the island shows what appears to be an expanded look at the box art alongside the English version of the trailer which showed off some of the activities to take part in on the island.

The new trailer can be seen above, a preview of the game that looks as though it was formatted to be a quick, 30-second TV spot for New Horizons. It’s the same as the Japanese trailer which Nintendo shared a few days ago though, so don’t get your hopes up for new footage, though this one should be more insightful if you’re not fluent in Japanese.

Joining the New Horizons trailer was another preview of some of the activities you’ll be getting into thanks to Nook’s Deserted Island Getaway Package. Shared on Twitter by the official Animal Crossing account, the expanded look at the game’s box art shows things like fishing, chopped wood, reading, sunbathing, catching bugs, and camping out among other things. If you’re looking for some of your favorite Animal Crossing characters to make an appearance, there’s a good chance you’ll spot them here.

By the way, here’s one more sneak peek at what awaits in the Deserted Island Getaway Package! It looks so fun, doesn’t it? pic.twitter.com/onDIV9eWYs

Animal Crossing: New Horizons will be the first game from the series to release on the Nintendo Switch. Its first trailer was revealed back at E3 2019, and it’s release date is now just a few months away.

“If the hustle and bustle of modern life’s got you down, Tom Nook has a new business venture up his sleeve that he knows you’ll adore: the Nook Inc. Deserted Island Getaway Package!” Nintendo said about the upcoming game. “Sure, you’ve crossed paths with colorful characters near and far. Had a grand time as one of the city folk. May’ve even turned over a new leaf and dedicated yourself to public service! But deep down, isn’t there a part of you that longs for…freedom? Then perhaps a long walk on the beach of a deserted island, where a rich wealth of untouched nature awaits, is just what the doctor ordered!”