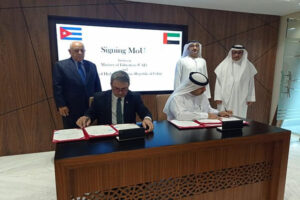 On its Facebook account, the Cuban embassy announced that this agreement, signed on Wednesday, will favor the exchange of expertise and cooperation projects between both countries.

On behalf of both parties, the document was signed by the Undersecretary for Higher Education Academic Affairs, Mohamed Al Mualla; and the First Deputy Minister of Higher Education of Cuba, Walter Baluja.

Previously, Baluja, also a Cuban deputy, had met in this capital with President of the Emirati-Latin American and North American Parliaments Friendship Committee, Tariq Al Tayer.

During the meeting, both parties expressed the interest of their respective nations in promoting parliamentary and academic collaboration relations.