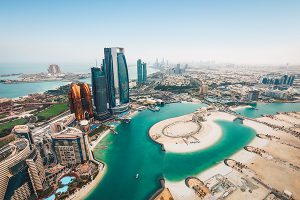 The total value of Abu Dhabi’s non-oil foreign trade in the first quarter (Q1) of 2022 amounted to AED61.522 billion, a 15 percent increase compared to the same period of 2021.
Exports recorded a growth of 35 percent in the first three months of the year compared to the same period of last year, valued at AED24.449 billion, while imports recorded an increase of 5 percent with a value of AED25.374 billion. Re-exports saw a rise of 4 percent, valued at AED11.698 billion compared to AED11.237 billion last year.
The value of trade in commodities from ordinary metals and their products exceeded AED12.83 billion, a rise of 27 percent, compared to AED9.491 billion in the first quarter of 2021, while trade in pearls, precious stones, precious metals, and their products, recorded growth during the same period of 78 percent. The trade of wood and its products, cork, mats and baskets grew by 47 percent, while the trade of leather goods, animal kits and travel supplies recorded a growth of 43 percent.
Saudi Arabia accounted for the largest share of total trade of 23 percent, valued at AED13.921 billion, followed by Switzerland with eight percent, the United States with seven percent, China with five percent, and India with five percent.
Rashed Lahej Al Mansoori, Director-General of the General Administration of Customs in Abu Dhabi, said the proactive services launched by the administration during the relevant period contributed to the growth in non-oil trade in the first quarter of 2022 compared to the same period of last year.
The administration offers a set of strategic services based on digital technologies and artificial intelligence, he added, affirming that improving the efficiency of the customs sector will boost Abu Dhabi’s stature as a global capital of trade.