We reviewed Wreckfest back in 2019, giving the game a very respectable 8/10.  Well now, the game has been given a bit of an upgrade and shipped out on PS5.  It initially came out as one of the PlayStation Plus free games but by the time you’re reading this, it’s now no longer free (unless you’re an owner of the original PS4 version).

As rational, sensible human beings with a degree of taste when it comes to gaming we are big fans of FlatOut or, more specifically, FlatOut: Ultimate Carnage which was the Xbox 360’s updated version of FlatOut 2.  The series’ developer, Bugbear Interactive, who aren’t the most active developers ever it seems, have returned to their crashy, smashy racing roots but without the FlatOut name.  Instead we have Wreckfest, a damage-focused driving game that combines racing and demolition derby events to great effect.

Being a racing game, Wreckfest eschews any sort of plot and instead gives you three main options:  quick races, online events and a significant career mode that sees you taking on events, single races or tournaments, using a mixture of vehicles that trade speed for strength in various ratios.  With the online presence not established yet, we dived head-on into that career mode. 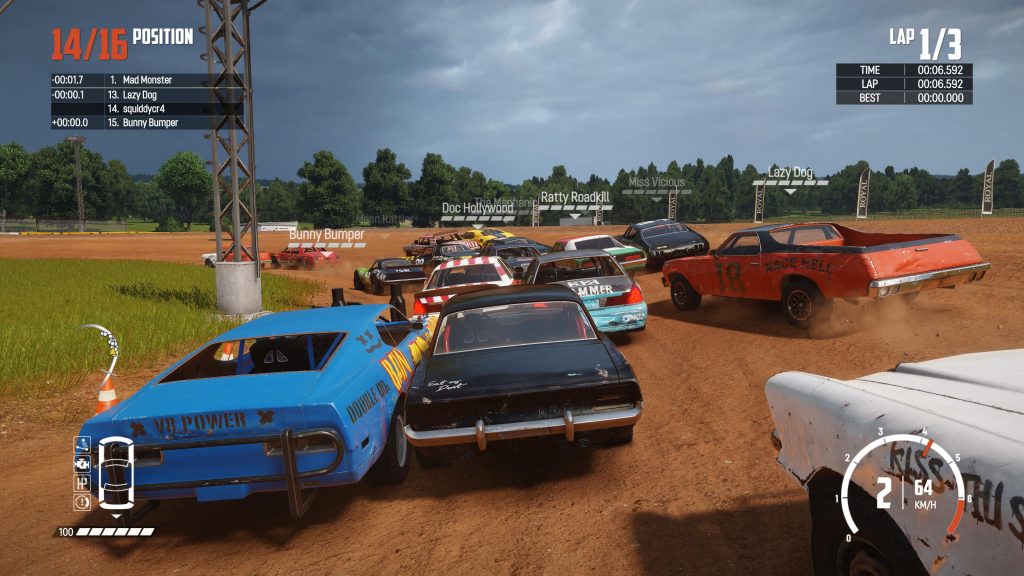 The structure is pretty good.  There are five sub-campaigns, each offering a mixture of events.  These events yield points and if you get enough points, you can move onto the next campaign.  This gives you a bit of flexibility to leave certain events behind if they are too much of a struggle to beat or if they’re not your favourite type.  Within any campaign you’ll get a mixture of races and demolition events across a wide range of tracks, many of which that like you and your field of racers to coalesce into a big shunting wreckage whenever possible.

Before we get into the damage physics, the main racing needs to be talked about and it stands up well.  There’s a good sense of speed and connection to the often uneven tracks and so you’ll be working hard to maintain a good driving line while squeezing that R2 button to death.  We practically developed arthritis trying to coax out a few more MPH in an effort to stay ahead of the competition and we found the basic racing to be very enjoyable. 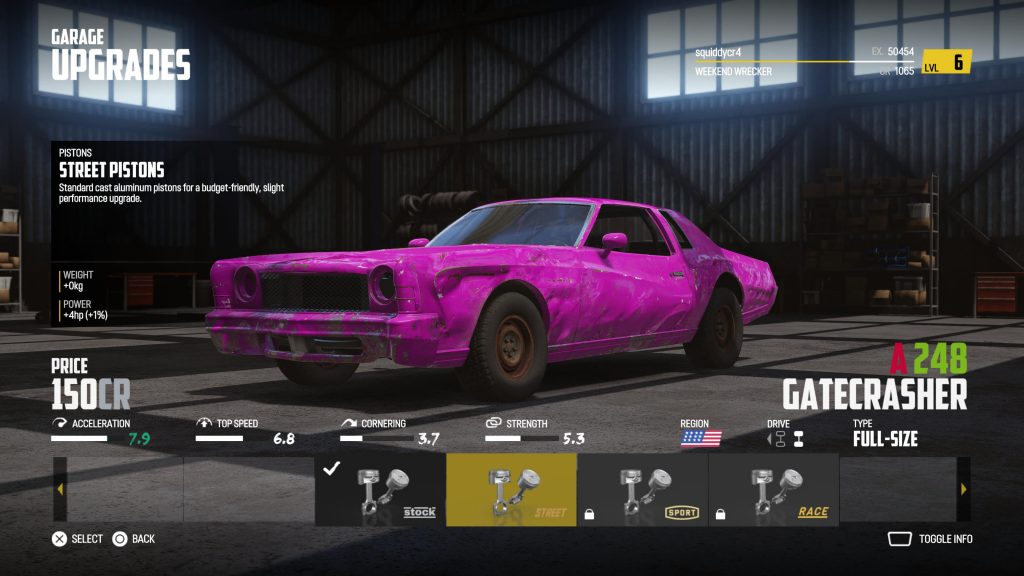 The mixture of tracks is good also but as we said, they do like to ‘encourage’ accidents and, as with so many other racing games, you can see almost certain victory snatched away all too often when some AI bastard comes too close and helps you to spin out or gently persuades you to eat shit on a nearby wall.  It can be tough but thankfully Wreckfest allows you to restart a race without taking away the progress from a series of events and the craziness of seeing your first place spot get blown up by getting sideswiped on the middle of a figure eight.

So, the damage.  All vehicles are susceptible to damage and this is indicated by an overall health rating.  You can also see the localised damage on your car which is indicated on your HUD and basically tends to tell you that that massive gap where your front bumper used to be is now one hit away from you taking the bus to work for the next few weeks.  But while damage is a factor in all races, it’s not quite the big deal we had hoped it’d be.  Sure, cars dent and warp and eventually stop working but it takes a while.  You don’t get the immediacy of a Burnout game and even when we were ploughing through smaller vehicles in a school bus (that old FlatOut favourite), the amount of damage inflicted was unsatisfyingly low at times.  Demolition derby events tend to be a bit more exciting though and there’s always a little bit of primal joy to be had from hunting down potential t-bone victims in a field of 24 cars. 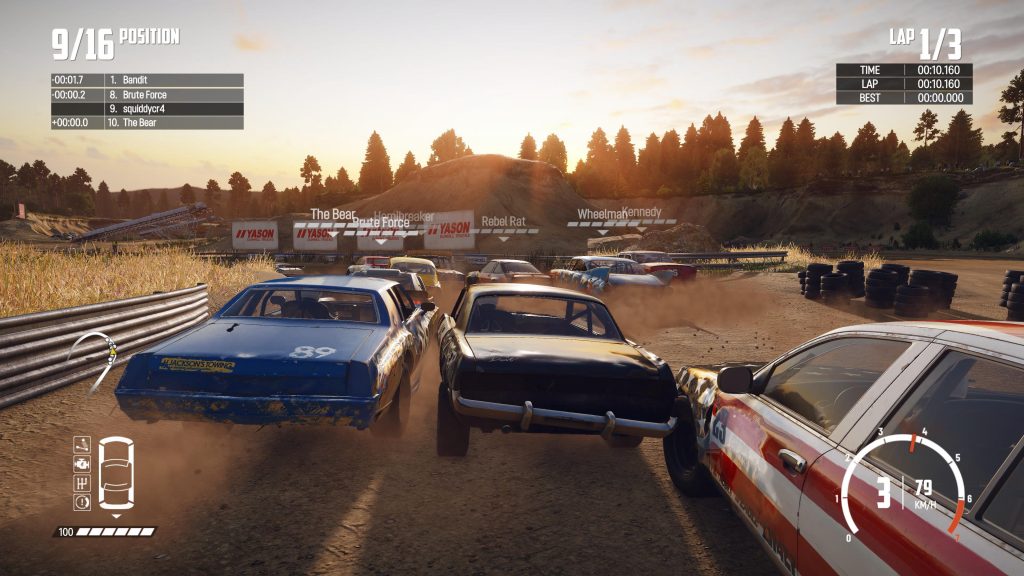 The campaign mode does offer a good mix of events but there’s nothing quite as outlandish as some of those mini-games the FlatOut games gave us.  This is all strictly on the track (or in the demolition derby arenas) so don’t expect to be launching cars at basketball hoops or anything quite as silly as that.  Maybe that’s the game’s biggest fault, it never quite goes all out.  Other games have done a lot more with car damage, while others have nailed the environmental destruction aspect (including the brilliant MotorStorm: Apocalypse or Split Second) where as Wreckfest seems to be more anchored in reality.

To emphasise this further, the game adds a garage option where you can tinker with your cars adding parts or painting them and you can tune them too.  This feels a little tacked on and not something that arcade racing game fans will appreciate and it doesn’t always feel like your upgrades make much difference.  Also, you do have a lot of vehicles and so it is hard to know where is best to spend your cash.  The customisation options are pretty limited too in terms of liveries and paint types (you have the full range of colours but no metallic options or stuff like that). 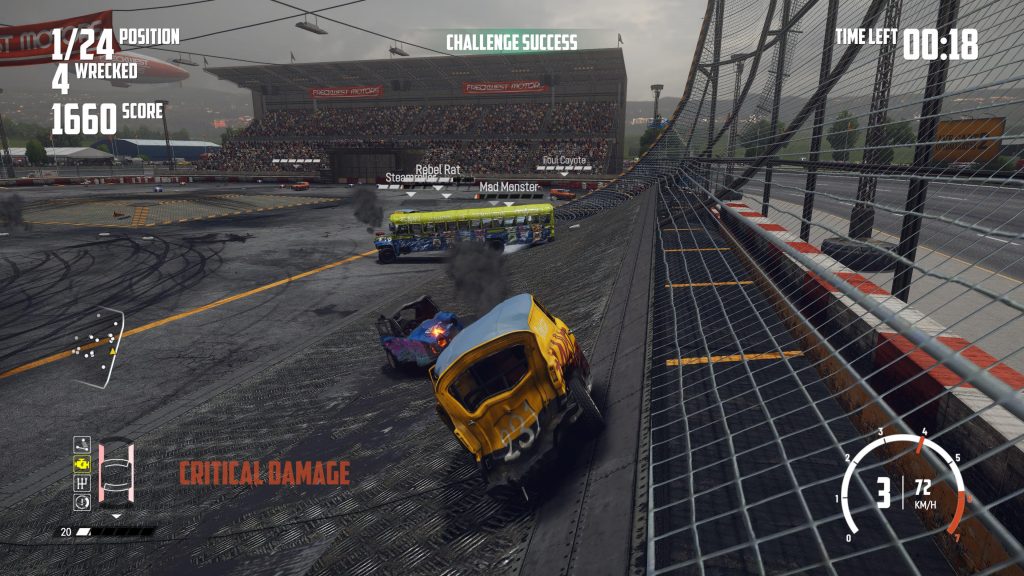 Once we got our heads around the fact that this was a slightly more realistic game than we were expecting, we did enjoy Wreckfest.  The gameplay is solid and enjoyable for sure but when you do see the slightly more interesting events, you do pine for some real madness from the game.  This is even true of the environments which are all just standard racing locales.  We’re not expecting Mario Kart or anything but we could do with a bit more variation and colour sometimes.

That said, visually the game does well.  Everything looks sharp and realistic and the damage modelling seems to be on point (from our limited experience of steering into bollards).  The sound also gets things right with all the various engine whines and roars doing their bit to add to the realism.  We could definitely do without the soundtrack though which is a bunch of modern metal bands who aren’t heavy or good.  Obviously that’s subjective but I’d say it is scientific fact that putting in middling metalcore with singalong poppy choruses isn’t as good as having some decent properly heavy bands that would compliment the action a bit more. 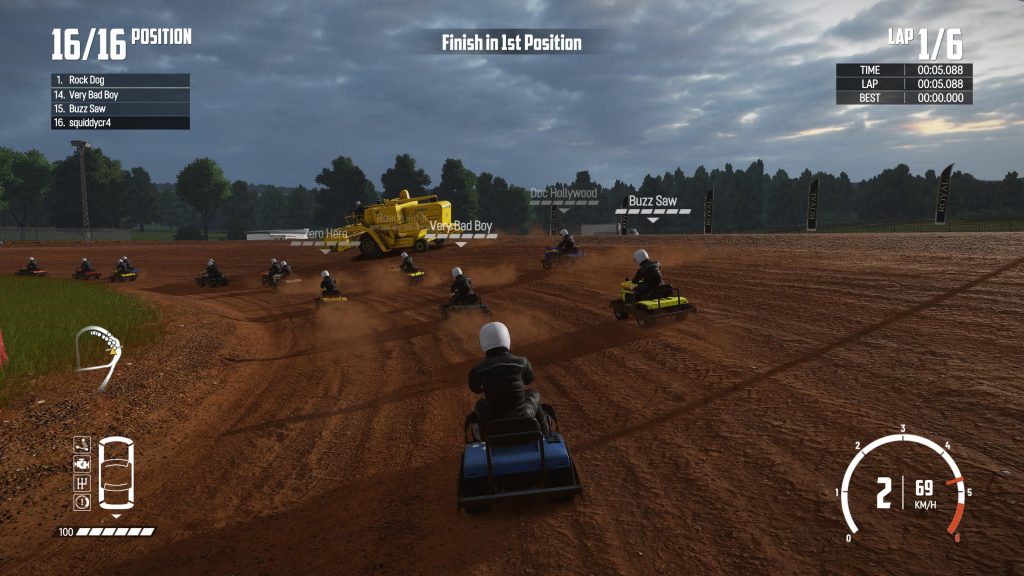 The PS5 upgrade puts everything into super-sharp 4K with a silky smooth frame rate that holds up no matter what is happening.  We were genuinely taken aback by how nice everything looked including some decent lighting.  The other noticeable upgrade is in terms of haptics and these really impress.  You really feel a connection to the track with localised rumbling depending on which tyres you’re shredding and the joypad speaker does well to emphasis damage and gear changes.

The only let down in terms of PS5 upgrading is the loading times.  Sure, they’re quicker than the PS4 version but they are still there which isn’t great when you consider that the PS5’s biggest draw is that it pretty much does away with them.  They may only be five or so seconds long but it’s weird seeing a loading percentage counter these days.

In summary Wreckfest does a good job of mixing racing and crashing in a meaningful way and offers a decent challenge.  It could stand to be more of a party game at times but if you want a mix of arcade racing with gritty realism, this might be right for you.   However, we’d love to see a sequel that mixes that realism with a whole lot more silliness.

Wreckfest looks, plays and feels better than ever on PS5 and its mix of arcade chaos and realistic physics still holds up very well indeed.