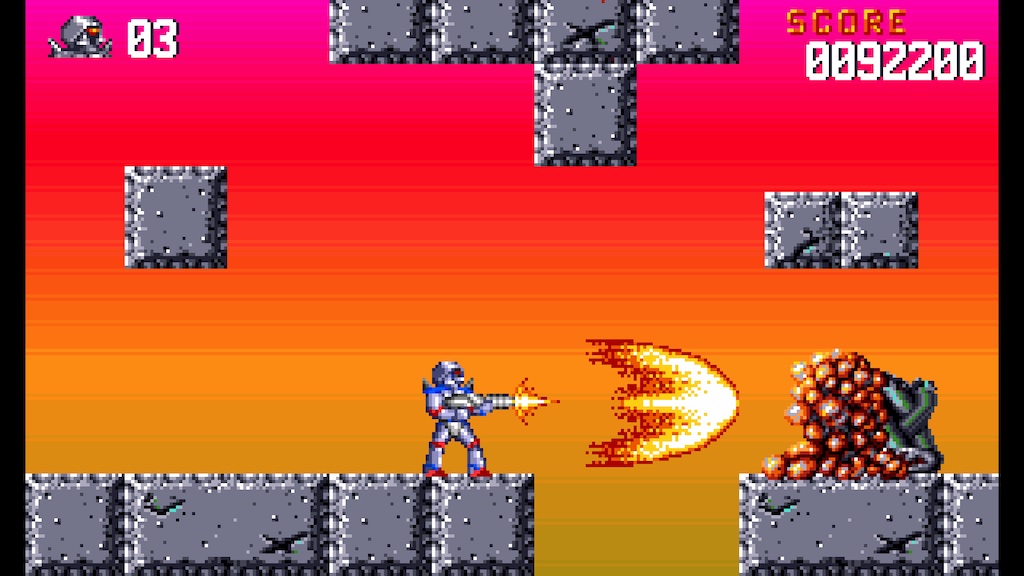 Shmup aficionados who experienced computer gaming during the mid-to-late 1980s on the Commodore Amiga and Atari ST — and then during the early 1990s on the Sega Genesis/Megasdrive console — should be familiar with the knuckle-whitening, blistering action of Turrican by developer Rainbow Arts. This frantic, futuristic shmup was eventually given a sequel – known plainly as Turrican II – and released on the 16-bit computers of the day.

During the 16-bit console war, the Sega Genesis and Super Nintendo received the following  action-packed Turrican games – Mega Turrican (Genesis/Megadrive) and Super Turrican (Super NES/Super Famicom). These two releases were developed from the ground up with new enemies, levels and weapons, and they went on to be cult classics with run-‘n-gun fans the world over.

Turrican Flashback for the Nintendo Switch is a collection of all four games, emulated to near-perfection. The Amiga version starts the collection off, since it was the first game released in the series. As Turrican, the player must shoot their way through 5 multi-level worlds that are infested with enemies, traps and underground passageways. Along the way, the player can upgrade their firearm by collecting power-ups that range from multi-shot to rockets, to name just a few. In addition to this, the player can roll through a level Metroid-style, and use a 360 degree ‘Fire Whip’ weapon to eliminate airborne critters and organisms that are just out of reach. The aforementioned  ’Fire Whip’ is an  integral part of gameplay, as it can also be used to shoot through debris that impedes the player’s progression. (It’s also worth noting the importance of this weapon and its appearance in every Turrican release/sequel.) 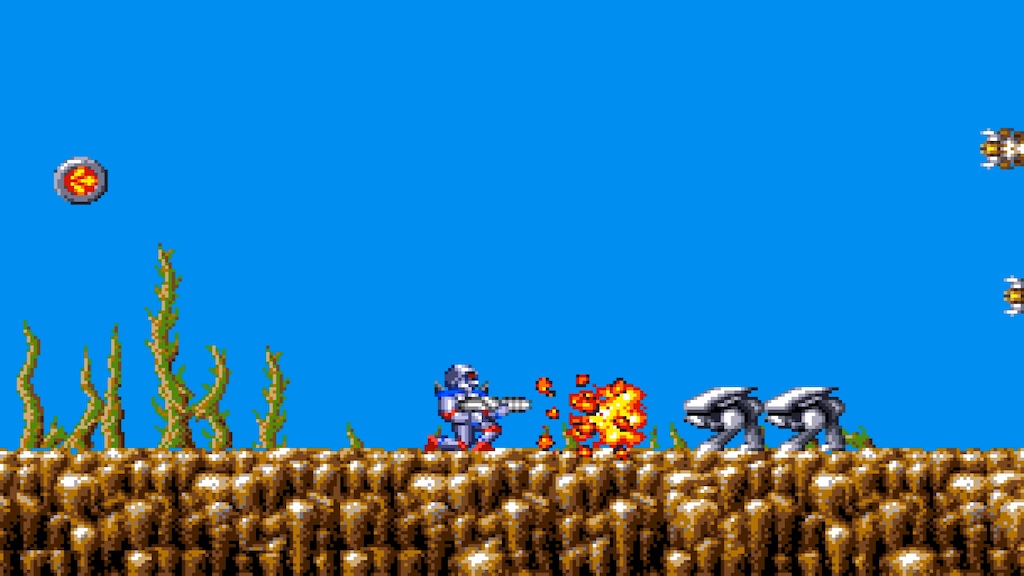 The emulation of this title (and the Turrican games that proceed it in this ‘flashback’ collection) are spot-on, and the action never misses a beat. The controls for Turrican feel a bit chunky in places, but this was also an issue in the original release (but later rectified in Turrican II and its Sega Genesis counterparts). The issue arises when moving the ‘Fire Whip’ in circles; it doesn’t feel as responsive or as fast as it does in Turrican II. But alas, Turrican was the first game in the series and deserves a pass. There’s more to like here than expected (even after all these years), and anyone wanting to experience the meager beginnings of this iconic shmup series won’t be disappointed.

Turrican II: The Final Fight is essentially more of the same, but with vastly improved controls (i.e. the Fire Whip is easier to control), more enemies and tougher-than-nail bosses to defeat. The morph-ball function (the ability to ‘role’ through levels) and the non-linear gameplay – where the player can explore the labyrinth-like levels to uncover secrets – have also returned. The controls for Turrican II are identical to its predecessor  – B button jumps; Y button fires Turrucan’s weapon(s); and holding down Left Trigger activates the ‘Fire Whip’. In addition, the Right Shoulder button activates a towering wall-like shield that clears the entire screen of enemies, and pressing the Right Shoulder button  will transform Turrican into the nearly unstoppable morph-ball, which can roll into tight spaces and roll over ‘spikes’ without sustaining any damage.

Like the first game, Turrican II is a solid effort in the series. The gameplay remains familiar, and the challenge has increased considerably since the first game. Mega Turrican – the first Turrican game to appear on the Sega Genesis/Sega Megadrive developed by Factor 5 – is somewhat of a departure from the Commodore Amiga originals. For starters, the physics behind the platforming mechanics have changed. For example: when jumping, Turrican ‘feels’ heavier, and its more difficult to reach platforms that are suspended high above the playfield. This issue is remedied by Factor 5’s inclusion of a ‘Steal’ rope, which helps the player grapple onto objects before jumping. Unfortunately, this new grapple feature has replaced the popular ‘Fire Whip’ weapon seen in the previous two games.  Mega Turrican also includes brand-new levels; a new assortment of enemies; and imaginative boss monsters. 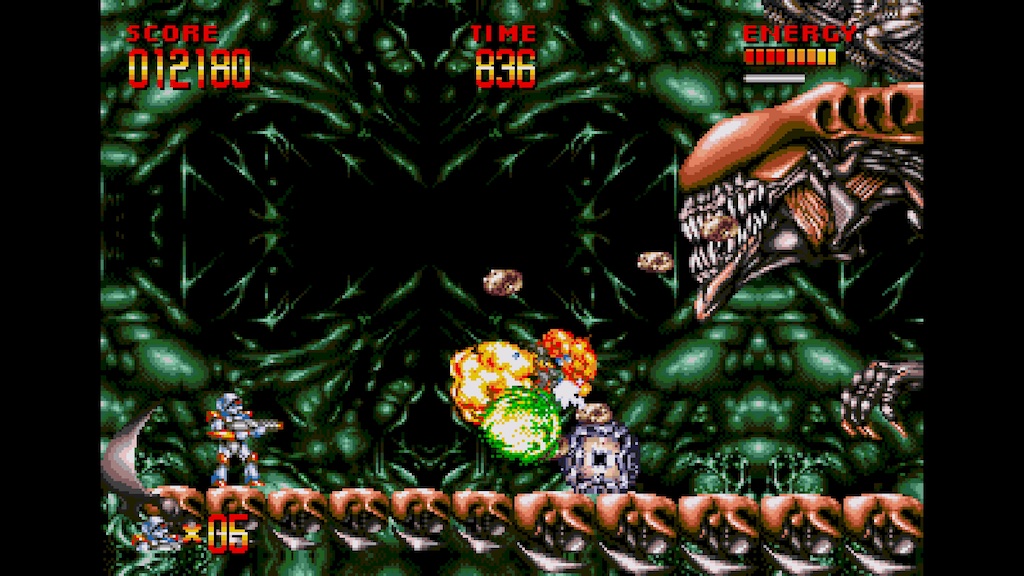 Super Turrican for the SNES – in terms of gameplay and graphics – resembles the Commodore Amiga’s versions of Turrican . The sprites (including the enemies) look like they were lifted straight out of Turrican II: The Final Fight. The famous ‘Fire Whip’ game mechanic from the original game(s) is present, and the fast action and tight controls (which felt different in Mega Turrican) are also present. Aesthetically and gameplay wise, the Super Turrican feels like a bonafide sequel to the Amiga sequels, while Mega Turrican – which a fantastic game in its own right – deviates greatly from the source material used in the first two games.

Turrican Flashback is a fantastic collection to own on the Nintendo Switch, especially for gamers who grew up playing any of the four Turrican ganes present in this collection. The emulation is spot on; the controls never falter; and the entire package provides the best environment possible for fans and newcomers alike, to enjoy these classic run ‘n gun shooters from year’s past.