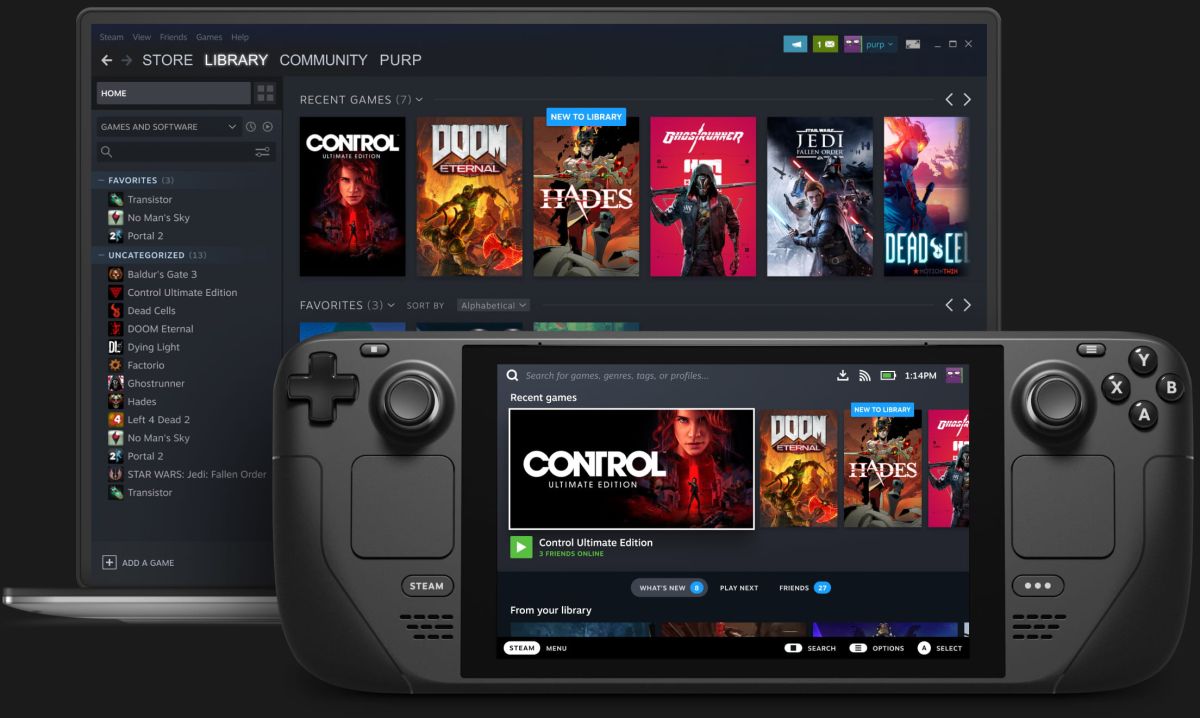 Valve will release a new handheld gaming system called the Steam Deck this December, effectively giving every game on Steam the portability of the Nintendo Switch.

The company announced the new handheld today. Starting at $399 and scaling up to $649 with additional internal storage and accessories, the Steam Deck comes fully loaded with thumbsticks, a D-pad, touch trackpads to mimic mouse movements, and face buttons, as well as shoulder and back buttons.

The basic $399 Steam Deck sports 64GB of internal storage (eMCC format) and comes with a carrying case. For $529, you can upgrade to 256GB of faster storage on an NVMe SSD – like the ones used in the PS5 and Xbox Series X – and get an exclusive Steam profile bundle. At the top end of $649, you get 512GB of space on a high-speed NVMe SSD plus a model with a premium anti-glare etched glass screen, and it comes with exclusive accessories including a virtual keyboard theme and a special case.

The general form factor is undeniably reminiscent of the Switch, but it’s got a lot more going on – especially under the hood, using a custom AMD Zen 2 APU to power the thing. With a quad-core Zen 2 CPU running at 2.4 – 3.5GHz, 8 RDNA 2 CUs running at 1 – 1.6GHZ for the GPU, and 16GB of DDR5 RAM, Valve says the Steam Deck comfortably “runs the latest AAA games.”

The full Steam Deck specs confirm a 7″ 1280×800 touch-enabled LCD screen with a 60Hz refresh rate. The handheld’s 40WHr battery delivers 2 – 8 hours of battery life depending on the intensity of what you’re playing, and the whole handheld clocks in at 669 grams, or roughly 1.4 pounds. All models come with a high-speed microSD card slot, and the handheld also supports 2.4GHz and 5GHz Wifi, Bluetooth 5.0 for controllers and accessories, and a 3.5mm audio output.

Crucially, and also like the Switch, Steam Deck has a USB-C dock that you can use to connect to external displays for up to 4K 120HZ or 8K 60Hz output. The dock has two USB 2.0 ports and one USB 3.1 for peripherals, DisplayPort and HDMI output, and hardline ethernet. The Steam Deck dock will be sold separately (for a currently undisclosed price), and because Steam Deck is effectively an open PC, Valve says you can just plug it into a TV or monitor and “do your normal productivity stuff, install some other game stores, whatever.”

You’ll be able to log into a Steam Deck with your existing Steam account, and Valve says you’ll have access to all the games you own, and you’ll be able to pick up wherever you left thanks to Steam’s cloud saves.

On July 16 at 10am PT / 1pm ET / 6pm BT, you’ll be able to reserve one Steam Deck for yourself for a small fee. You can find more reservation details here.