Nintendo has just announced their next big Switch game, “Big Brain Academy: Brain vs. Brain,” to be released on December 3rd of this year.  In what appears to be a continuation of the “Big Brain Academy” series last released in 2007 for the Wii, Nintendo’s newest game promises a fun and challenging battle for up to 4 players. 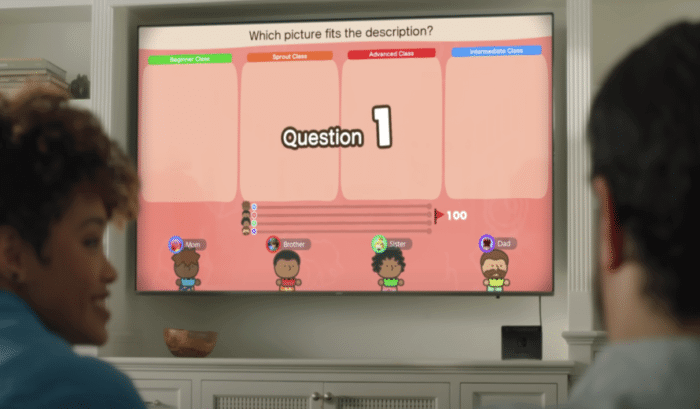 Based on the announcement trailer, you can take on a variety of challenges to test your brain in a solo or PvP experience.  These take part in mainly mini-puzzle, of which there are different difficulty levels, ranging from the easiest “Sprout Class” to the most difficult “Super Elite class.”  For example, in the “Sprout Class,” you may be asked to quickly pick the image of a fish out of four pictures of aquatic creatures.  In the “Advanced Class,” you may be asked to pick which animals walk with two legs.

There are a variety of game modes that can transform the game into an entertaining party game or a challenging solo experience.  For multiplayer, there are a few options.  The first is a head-on touchscreen battle for two players to duke it out.  The second is more family or party-oriented – up to four players can compete on a bigger screen with separate Switch joycons.  In addition, you can set a different difficulty level for all players to even the playing field.  Finally, you can compete with random players online

For the single-player experience, you can “improve your Big Brain Brawn score” through solo challenges.  In the previous games, you were scored on how heavy your brain (supposedly) was, so this may be a similar scoring system.  In addition, you can take on “ghosts” of your friends’ attempts, emulating a multiplayer experience if you can’t make it at the same time as your friend.

What do you think about the latest Nintendo game to release on the Switch? Let us know down in the comments, or hit us up on Twitter or Facebook.