Ness’ Earthbound hat comes to the real world thanks to New Era, Earthbound popup store on the way 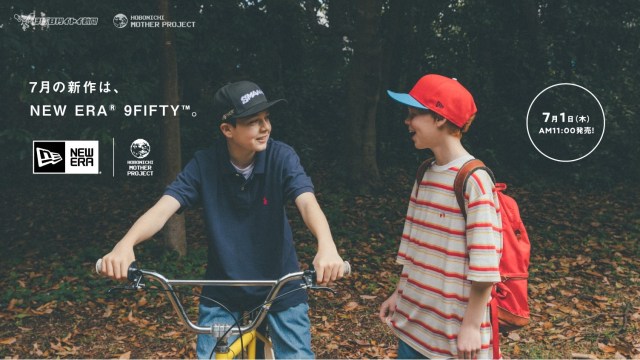 It’s amazing what a difference a couple of video game console generations can make. When Earthbound (or Mother 2, if you’re going by its Japanese-market name) came out for the Super NES in the mid-90s, many gamers of the day scoffed at the simplistic, cartoony designs of its main characters for looking like something from the 8-bit NES days. Fast forward to today, though, and the purposely stylized aesthetic is regularly praised for its whimsical, nostalgic feel.

So in a continuing example of how “Earthbound looks cool” has become a common sentiment, hat maker New Era is offering a real-world version of the cap worn by the game’s protagonist, Ness.

Part of New Era’s popular 9Fifty model line, the Mother franchise logo is stitched on the side in a spot that sits at the wearer’s right temple, confirming the suspicions of fellow fans that the otherwise subtle salute really is intended for the classic RPG.

New Era has a second Earthbound cap as well, one in black that announces “SMAAAASH!”, just like the on-screen text when you land a critical hit in the game.

Aside from these lids, there’s another eye-catching piece of Earthbound merch on the way in the form of a gigantic Mr. Saturn Plushie!

The name is actually a little misleading, as there are actually multiple Mr. Saturns, since they’re a whole race of creatures that look like a head with a prominent nose and legs.

▼ The Mr. Saturn is a reissue of a plushie that was originally sold in 2009, but has been available for some time.

The Mr. Saturn plushie, priced at 14,520 yen (US$140), can be pre-ordered here through the Hobonichi Mother Project online shop, with shipping scheduled for June 17. The hats, on the other hand, don’t go on sale until July 1, and will also be available at an Earthbound/Mother-themed popup shop opening at the Parco Department store in Tokyo’s Shibuya neighborhood from July 1 to 11.

▼ The store will be called Mother no Hiroba, or “Mother’s Plaza,” in Japanese.

And yes, Shibuya Parco is the same department store where you’ll find the permanent Nintendo Tokyo superstore, so you might want to hit the ATM before you go.

Source: Hobonichi via IT Media
Top image: Hobonichi
Insert images: Hobonichi (1, 2)
● Want to hear about SoraNews24’s latest articles as soon as they’re published? Follow us on Facebook and Twitter!