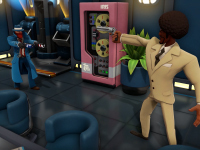 Our Evil Genius fun will be heading to the consoles soon with this announcement for Evil Genius 2: World Domination

I had a feeling that this announcement was coming and now here we are, as Evil Genius 2: World Domination is now setting its sights on the PS4, PS5, Xbox One, and Xbox Series X before the end of the year. It was a solid title that we had on the PC from Rebellion and it mostly makes sense to offer it up to all of the other gamers out there if they so desire. They are just going to have to wait until the end of Q4 2021 to be able to see what Evil Genius 2 is all about firsthand. That is quite a bit of range from now, but it was not set down to hit the consoles before now, so we will take the win on this. Hells, we will take the win on it any time a solid game makes it out there for all of the various platforms and not stick to being an exclusive of sorts.

While we have to wait for this version of Evil Genius 2 to land still, we can take note that it looks like all of the DLC that will be out there is coming to these versions of the game. I hope that there will be some console-specific UI and control changes given how they were on the PC version that we had a chance to review here. None of them were overly bad, but when moving from a keyboard and mouse to a controller, I can see them getting a bit wonkier. My guess is that this is what was taking the better part of the development to make sure that Evil Genius 2 will work just as well in all forms out there. The rest of the game should transition over perfectly fine, even if the trailer does show off things that we never saw in the PC version of the game in the first place.

Evil Genius 2 is a satirical spy-fi lair builder, where players take control of an Evil Genius and set their plans for world domination in motion. When it feels this good to be bad, the Forces of Justice don’t stand a chance!

Build your own unique evil lair and cover operation, train a force of criminal minions to defend you’re your lair from the Forces of Justice, and dominate the world with a Doomsday Device in this direct sequel to the 2004 cult classic!

Did you think that we were ever going to see Evil Genius 2 hit the consoles out there or is this a great surprise to have? Do you think that the controls and UI will be shifted a bit to make it easier to access or will they be about the same in general? Could we see more DLC in the mix for more story and henchmen out there or will this be the pin for the end of it all? Let us all know down in the comments what you are thinking and then feel free to discuss it all if you so wish. We will share what we can for Evil Genius 2: World Domination as we get more, so please keep checking back for all of that and much more that will be out there.