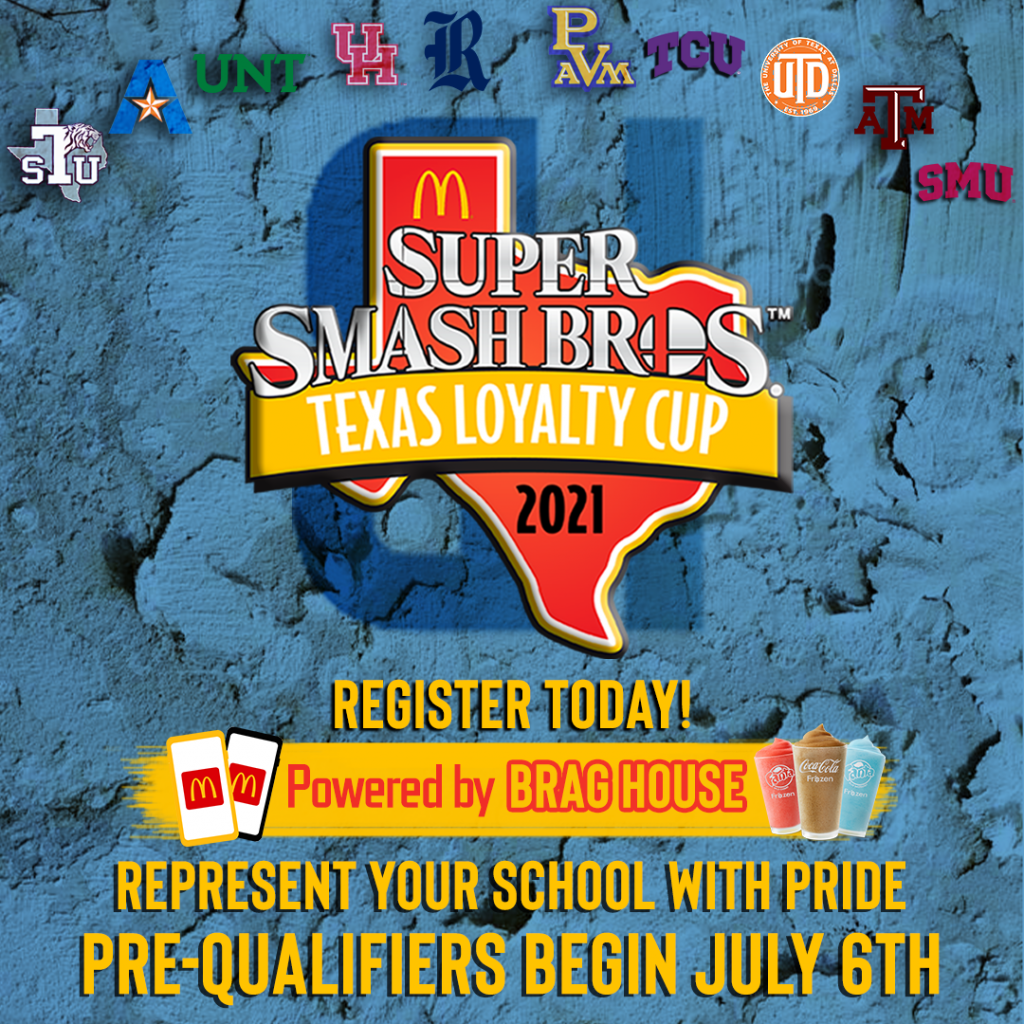 Brag House, a community gaming network, is set to host a Super Smash Bros. Ultimate tournament featuring competitors from 10 Texas universities, including the University of North Texas. Starting with pre-qualifiers on July 6-9, the Texas Loyalty Cup will feature a $1,550 prize pool with open registration for both students and alumni from the 10 universities. The initial pre-qualifier matches will determine which individual student will represent their school in the final bracket matches against the nine other schools July 20-22. Super Smash Bros. Ultimate is a competitive crossover fighting game released by Nintendo in December 2018. Brag House Head of Production Ryan Baker said the company wants to encourage more people to become invested in esports through this tournament. “Esports can be very selective,” Baker said. “Only the top 1-to-3 percent in any given game will have a chance to compete competitively on an actual stage. While we definitely embrace and love to have really talented gamers who are a part of teams officially, we want to give [opportunities to] other students and gamers who maybe don’t have the time to put into practice and training.” During its pre-qualifier phase, the tournament’s matches will be single elimination and seven minutes long with three stocks (lives). Once the 10 players representing their respective schools are determined, the seats for the final championship will be based on engagement both inside and outside the tournament’s live streams. Players from the six most engaged schools will automatically qualify for the championship tournament while the remaining four will face off in play-in games for the last two slots. More engagement makes for an easier road to winning the tournament, meaning fan engagement will be a crucial part of competitors’ success. With this points system, Brag House has made it a priority to offer fans a tangible way to impact games they would otherwise passively watch. “In esports, there’s really nothing the audience gets to do,” Baker said. “At sporting events, they will do things like being able to play a little game on your phone, and whoever gets the top score will show up on the Jumbotron. So our production team was like, how can we incorporate something like that into esports?” Students and alumni can also win points for their school in a few different ways. They can place a “brag” — or prediction — in the Brag House app or make a “hot brag” on a promoted prediction. Other options include completing a daily challenge during the live stream or earning points for every pre-qualifying match prediction made on the Brag House website. Whichever school has the most points at the end of the tournament wins a tailgate party sponsored by Coca-Cola and McDonald’s. Applied arts and sciences senior Daniel Dansby, 24, said the open registration format could allow more esports opportunities. “I like the open registration part because people who usually do not see a reason to play the game now have a reason to play,” Dansby said. “ I have a feeling esports will expand into doing more skill-based tournaments where they will also include different divisions for all different skill levels. I think it has the potential to branch off into so many different things, and I think Brag House is perfect for the open registration format.”  Baker said the schools to watch out for will be a surprise with the open registration format. “We do have some in-house predictions going on,” Baker said. “My money is set on either North Texas or the University of Texas-Dallas. Although I know this is their esports team, I don’t know if any of them will be competing, but UT-Dallas has won two of the three past National Championships in Super Smash Bros. Ultimate through the Collegiate Star League.”  University of Houston junior Luiz Martinez, 19, said he is excited to compete in the event as it will be his first tournament. “I’m most excited for the opportunity to play against other great players and show off my skills,” Martinez said.  The tournament will be streamed on the Brag House website and on Brag House’s Twitch account. Baker said Brag House’s dedication to encouraging esports competition is what fuels the company to host events like the Texas Loyalty Cup. “Every single person here has a deep passion for esports and gaming,” Baker said. “Being able to be a part of it, make it a career and watch it grow brings us a lot of joy.”