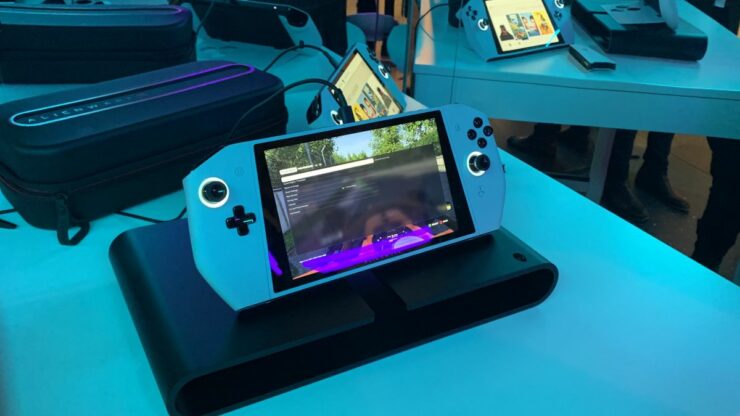 Alienware, in their attempt to always innovate the gaming market, has shown the Concept UFO at CES 2020, and this device has seemingly taken some inspiration from the Nintendo Switch. The Concept UFO is a portable device with two controllers that can detach from the main device very similar to Nintendo’s Joy-Cons.

Alienware’s Handheld Gaming PC, the Concept UFO, is powered by a Ryzen Processor!

Dell, Alienware’s parent company, and Alienware have not committed to a specific release date, specifications, price, or even if this concept will ever be seen on the market. One specification of this device is that it is powered by a Ryzen CPU, although it’s unclear if its an embedded chip or something else. The device has an 8-inch screen, which is larger than the screen in the Switch, which is just 6.2-inches. The controllers included in this device are detachable and do follow a similar style to Nintendo’s Joy-Cons. Some other similarities of this device are the fact that this device can be connected to an external monitor for big-screen gaming, but if you want to use the included screen, there is an included kickstand.

Some differences between this device and the Switch, one of those differences is the controllers are unable to be separated from either the primary device or the bridge device and work as one controller. The overall design is slightly different as well, having a larger controller size and an all-white coloring as well. Another difference is the software, this device is a portable PC for gamers that use games through various launchers like Steam, Origin, and Epic Games so it’s much easier to launch them from a central launcher.

No technical specifications were released besides the Ryzen CPU that powers this device. This device can play games like Mortal Kombat 11 and Rocket League smoothly, with no stuttering or screen tearing. There are some big questions regarding this device like the possibility of poor battery life, and other limitations that this smaller form factor causes. The big breaking point to this device will be pricing, specs, and if this device ever ends up on the market at all!